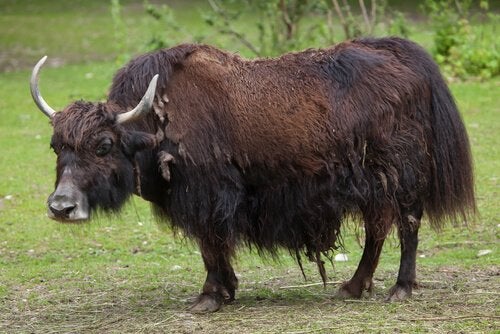 Within the immense territory of the third largest country in the world, you can find different biomes such as mountains, plateaus, deserts, coasts, and lowlands. Animals from China have adapted to this country’s geographical features in a surprising way. Continue reading to find out more!

Examples of Animals from China

Apart from the famous Chinese horoscope, in which each sign is represented by an animal, the local fauna consists of an innumerable amount of species. Below, you can learn about some of the most typical ones:

This bovine — in the picture above — is quite popular among Himalayan settlers. This animal is one of the representatives of Chinese fauna. The word “yak” in the Tibetan language means “male”, and females are known as “nak” in this region.

This animal has long, dense, dark-colored hair that’s usually black or brown, and it has short legs with hooves. The yak can weigh up to a ton and measure two meters tall in the wild. They have almost no problems with predators. Females and their offspring live in herds and the males live alone.

These animals were domesticated by man about 3,000 years ago and they are used for their strength, to carry loads. Also, they provide milk to make cheese and butter, and wool to make blankets and coats.

This is the most well-known animal in China. Although it belongs to the ursid family, it differs from them quite a lot. For example, their panda’s diet consists of eating bamboo and fruit. Likewise, pandas don’t hibernate because they live in a subtropical environment in China, Vietnam, and Burma.

This animal stands out for its study black and white body, dark round ears and tail, and small eyes. When they’re born, their bodies are pink, with some gray spots and are blind for a month. They stay with their mothers for two years. However, she breastfeeds them for only a year.

The silver pheasant lives in southwestern China, and southeastern Tibet. It usually lives in the dense forests with thick bushy areas. However, it was brought to England, where it is known as Lady Amherst’s Pheasant, in honor of the wife of the governor who was in charge of bringing these birds to their homeland.

Like other pheasants or peacocks, males have a very amazing black and white long tail that can measures 80 cm long. Its body has blue, red, yellow, and orange feathers. The female is chestnut-colored with some black spots.

This endangered mammal is another typical animal from. It inhabits the southern region of the country, particularly in temperate, humid forests, with abundant bamboo trees. As its name suggests, its fur is redd. However, it looks more like a raccoon than a bear, because it’s small and has a long tail.

The red panda is a sedentary animal that’s active only at sunrise and dusk. It’s sensitive to heat and is skillful at moving from branch to branch that sleeps with its tail covering its face. Also, it “cleans” its legs and stomach every day before eating. Besides eating bamboo, it also eats berries, fungi, roots, and fruits.

Also called, “irbis”, this feline is common in the mountains of Central Asia, which are more than 6,000 meters high. This is why there is very little information about this animal that has grey, dense fur, with black spots and a white belly. Its tail is very long and hairy because it uses it to cover itself while sleeping.

The snow leopard is in danger of extinction, due to being hunted for its fur. This predator feeds on rabbits, squirrels, deer, birds, shrews, and even goats and cattle, which it attacks during the day. It’s one of the few felines that doesn’t roar, because its vocal cords are very small.