Whether because of their fur, plumage, or scales, some animals look as if they were wearing glass all the time, making their appearance somewhat peculiar. 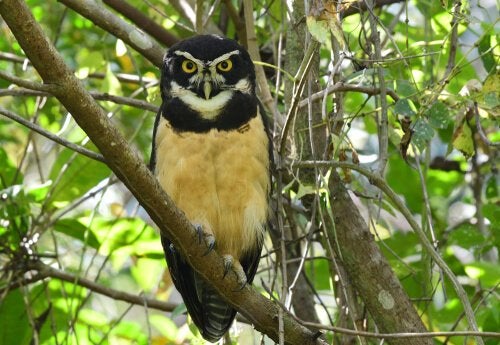 This article is not about animals with vision problems. It’s about animals that appear to be wearing glasses due to the design of their fur, plumage, or colors.  Would you like to find out more about these animals with spectacles? Read on.

What animals look as if they had spectacles?

There’s no doubt that nature often has the most extraordinary and curious thing. This is true even to the point that there are animals with spectacles, that look as though they have glasses on. Below are a few examples:

The first animal with spectacles on this list lives in South and Central America. This bird of prey (that appears in the image above) is large with a heavyset body that can measure up to 20 inches and weighs 3 pounds. The species has no sexual dimorphism so the males and females both look the same.

Its round head has an unmistakable appearance: large round yellow eyes with different colored feathers to the rest of its head and belly. This is why it’s called the “spectacled owl.”

They’re nocturnal birds that are more active during a full moon, and they’re also quite solitary. Although, sometimes they will couple up and build a nest in trees or natural crevasses. They feed on insects, frogs, small birds, and small mammals that they capture by swooping down on them.

Also known as the “Andean Bea,” this animal lives in the Andes mountain range in South America. Its body is completely black except on its neck and face, which has brown and white patches. If you look closely, it looks as it was wearing glasses.

The spectacled bear has a strict vegetarian diet and is a plantigrade animal. This means that it walks with its entire foot flat on the ground. Its large paws allow it to climb trees where it eats and sleeps.

This is animal also one of the few bears that don’t hibernate because it can find food all year around. The males are bigger than the females and can reach up to 5 feet long and weigh over 300 pounds.

Its scientific name is caiman crococilus but it’s also known as the white caiman or the common caiman. It lives in the swamps and marshes from southern Mexico down into South America, including the Amazons.

The males measure over 8 feet long, whereas females don’t aren’t longer than 5 feet. They mate during the rainy season. The mothers can lay between 15 and 40 eggs in nests made out of dry vegetation. The eggs need to incubate for 13 weeks and when they hatch, the babies can measure no more than 8 inches.

As for their diet, they’re carnivores, it consists of fish, reptiles, crustaceans, birds, small mammals, and amphibians.

Feared by many but also cherished by Hindus, the Indian Cobra, or Naja Naja is a venomous snake that’s famous for the hood around its head. It expands when the snake feels threatened and gives it the appearance as if it was wearing glasses.

The Indian Cobra measures around 6 to 7 feet and has several colors. Its venom acts on the nervous system and paralyzes the muscles, and even sometimes causing cardiac arrest in its victims. These snakes can be found in the open fields, desert, country, or jungles of India, Sri Lanka, Nepal, Pakistan, or Bangladesh. Plus, these snakes feed on frogs, birds, and rodents.

The last animal on the list lives in the depths (between 30 and 45 meters) of tropical oceans around the world. They can measure over 16 feet long and weigh up to 440 pounds. Its name comes from its enormous eyes that help it see in the dark.

The bigeye thresher has a whip-like tail that it uses to strike its prey before eating it. Its body has a dark brown color on its back and a lighter color on its belly. It also has a small mouth that’s similar to other fish.