Due to their color or appearance, these wild animals are definitely quite strange! 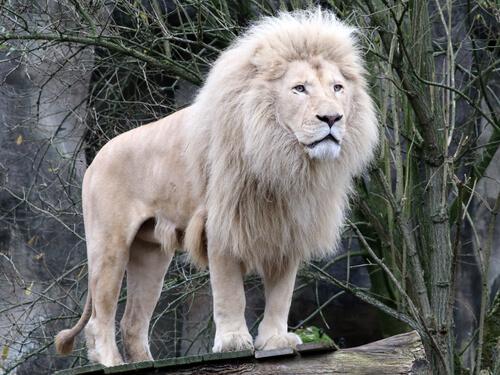 There are countless animal species around the world. This is one of the reasons why there are many that still haven’t ever been seen before. And when we do, they don’t stop to amaze us! Continue reading this article, you can read about the wild animals you’ve probably never seen before.

Either because they’re endangered or because they’re just extraordinary, the truth is that there are many wild animals that just don’t seem to be real. Below are some of the most impressive ones:

They’re believed to be the result of genetic mutations of the Southern African lion. However, many African people believe that they come from the gods and if one crosses your path, you’ll be lucky for the rest of your life.

It seems that their color is due to a very rare recessive gene that insides their fur color. Although it’s rare, there have been many registered cases of it. Their color makes them peculiar and original but also prevents them from living in their natural habitat for a long time because they are unable to camouflage with their surroundings.

Dolphins are really cute and sweet animals. For those who love colorful animals, then take a look at the Amazon river dolphin or pink river dolphin. They’re freshwater animals that can measure up to 2.5 meters (8.2 feet) and weigh about 185 kilos (408 pounds).

They’re believed to be the largest known dolphin. Also, this animal is sexually dimorphic. This means that the females can be half the size of males. A curious fact about these animals is that when they’re adults, their pink color  becomes more intense.

They’re very similar to common dolphins, except they have a somewhat shorter snout and are pink.

There is no better way to describe this animal than a sea monster with a friendly face. It’s a neotenic species, which means that this animal is able to mature while they’re still larvas.

Despite the fact that it’s an amphibian, this animal doesn’t undergo metamorphosis. This is something that’s uncommon in most amphibians, regardless of whether they live in the sea or on land.

This animal is about 15 centimeters long (5.91 inches) and it resembles a tadpole. They are found in Mexico, especially in the lakes, because they’re freshwater animal.

Unfortunately, as with many other species, this beautiful animal is in danger of extinction due to water contamination. Thus, other species compete to survive and prey on them.

Is it a giant cat, a lion, or a tiger? What did you think after seeing this photo? The answer is complicated. A tigon is a hybrid offspring of a male tiger and a female lion, which is the biggest feline known to How did this come to be? It’s very simple: the growth gene is found in female lions and male tigers. Thus, a tigon wouldn’t be born if a female tiger and a male lion would have crossed. Tigons are the result of two growth genes coming together.

If bats already give you goosebumps, wait until you to see this animal, which is the largest bat in the world. It can grow up to 180 centimeters long (70.86 inches). They got their name due to the fact that their head greatly resembles a fox’s head.

Fortunately, these animals live in Australia and Asia, especially because they aren’t blind!

What did you think about these wild animals you’ve probably never seen before? Which one is your favorite?