Animal Metamorphosis: What Is It?

We know that metamorphosis in animals means a great change in their appearance, although it also entails a series of important physiological changes that are not so well known; we'll tell you about the metamorphosis of insects, amphibians, mollusks, and crustaceans. 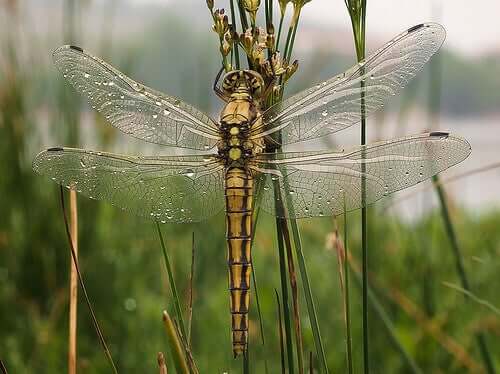 For us, it’s odd to think that a butterfly, this beautiful insect with colorful wings, was once a caterpillar. How is this possible? Well, it’s thanks to a mechanism used in several animals. Find out more about animal metamorphosis here.

What is animal metamorphosis?

It’s a biological and natural process where animals change shape during their lives. It’s not as simple as when a caterpillar changes into a butterfly. It’s much more complex than that.

Various insects, mollusks, amphibians, crustaceans and echinoderms all undergo this transformation, which is related to changes in behavior and habitat.

We’ll start by describing it in insects. We recognize it most in insects, even though they’re not the only ones to metamorphose. The process involves larval tissue rupturing and is replaced by the same amount of cells.

Insects usually experience several stages of metamorphosis. First, they’re a nymph, then larva and finally, an adult. In the middle of each growth phase, the protective layer molts.

There are two different types of metamorphosis in insects. The first is hemimetabolism, where they experience multiple molting phases and continuously eat. Examples of this type of animal metamorphosis are grasshoppers and bedbugs.

The second is holometabolism, which is more complex. When they hatch from the egg, they become nymphs, and molt several times before becoming larva. They then stop eating and become immobile before completing growth. This occurs in 80% of insects, such as butterflies, beetles, flies and wasps.

In both cases, the effector hormones send various signals to the brain which are responsible for the growth and metamorphosis of the insect. Likewise, the molting process is related to neuronal and environmental signals, as well as circadian rhythm. This causes an increase in hormone production and the activation of growth.

The most well-known case of metamorphosis in amphibians is the change from tadpole to adult.

Since they can swim and breathe through gills underwater from birth, this process sees them preparing to live on land. They start by growing tails and small circular mouths.

Later, they grow front and hind legs. Their tails and teeth disappear and the way they breathe changes from gills to lungs, as they adapt to life on land.

That’s not all –  their skulls change from cartilage to bone and their tongue muscles develop. Although these animals return to the water to reproduce and spawn, they won’t spend all their time in an aquatic environment.

In these cold-blooded animals, two hormones secreted by the thyroid glad control metamorphosis. The first is thyroxine (or T4) and the second triiodothyronine (T3), the latter being the most important.

The metamorphosis in mollusks and crustaceans

In this third and final group we think about annelids, crustaceans, echinoderms and mollusks, which have an ‘incomplete’ metamorphosis. Meaning that when they’re born they will pretty much look the same through their entire lives. But they’ll develop more complex structures every time they molt which will help them to reproduce.

The best-known case of metamorphosis in crustaceans is the crab. They’re known to “leave their home” or shell once they grow too large for it.

5 Interesting Facts About Tropical Fish
Fish are remarkable creatures, they have been around for more than 450 million years. Tropical fish have evolved to adapt to their marine environment. Read more »
Link copied!
Interesting Articles
Wild Animals
5 Animals that Live in Grasslands