The red kite is a bird of prey and a scavenger, which prefers the easy route but is also capable of hunting. It frequents areas where there's human activity to take advantage of any remains it may find. 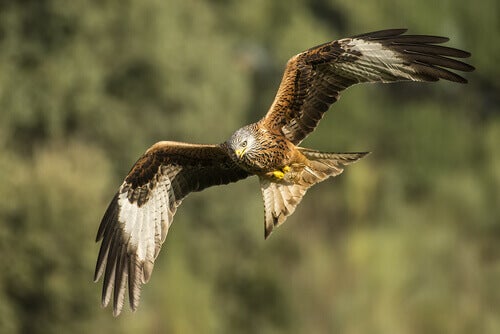 The red kite (Milvus milvus) is one of the most emblematic birds of prey species in Spain. And although this animal seems to proliferate, the truth is that its nesting is less and less common in the Iberian Peninsula.

Red kites are one of many diurnal birds of prey that fly through the Spanish skies. Together with the black kite, they form the two species of kites that live in Spain.

Characteristics and identification of the red kite

Agile in flight, this bird has a wingspan of almost 6.5 feet, and weighs about 2.2 pounds. Its length is about 23 inches. Identification in flight is quite simple. They have a fairly representative forked tail, the edge of which is tucked in. This characteristic sets them apart from other species that have a tail in the form of a fan.

The red kite is brown, with a rather striking gray head. Its most characteristic feature is the white spots on its wings, which distinguishes it from the black kite. It’s very difficult to distinguish adult animals from young ones. However, young kites have darker eyes, which lighten with time.

The simplicity of identifying this bird of prey makes it one of the most satisfying birds to see in the wild during your first birding trips. You can easily see this endangered species, which you’ll recognize right away with its very striking acrobatic flight.

Behavior of the red kite

This bird usually remains with other members of its species, and is quite adaptable. Although it’s not a strict scavenger bird, we usually find the red kite in dunghills and dumps. Therefore, it’s common to see it near various species of vulture. It’s also a skillful hunter, although it prefers young inexperienced animals.

While other birds of prey are shyer and need sparsely populated areas, the kite takes advantage of human activity. In fact, it even frequents slaughterhouses or roads, where it takes advantage of the carcasses to feed. This is one of the reasons why this bird seems so common.

Its tendency to remain in a group is especially pronounced during the evening and night, as it usually gathers in communal roosts where dozens of specimens can be found.

Habitat and conservation of the red kite

The red kite is an endangered species in the Iberian Peninsula. Not many realize this since it’s one of the easiest birds of prey to see in the sky. However, the ease with which we can spot these birds shouldn’t mislead us. Although can see quite a few in winter, they’re reproducing less and less in Spain.

Although the red kite appears in many guides as a species that remains all year in this country, the truth is that, due to global warming and rising temperatures, Spain is becoming more and more of a winter refuge. And the red kite, as the migratory bird that it is, decides to spend the summer in Northern Europe, where it breeds in increasing numbers.

Normally, it’s a bird that breeds in forest areas, while the wintering animals usually occupy cultivated areas, not afraid to fly near inhabited areas. It has numerous threats. Mainly poisoned bait and rodent poison, electrocution accidents, loss of habitat, and the current management of carcasses, which takes these birds into account less and less.

90% of this species lives in Spain, Germany, and France. In the case of the Iberian Peninsula, it’s found in practically the whole territory except the Canary Islands, Ceuta, and Melilla.