These exotic birds have a variety of colors with different shades and combinations. They live in the trees of Central and South America. 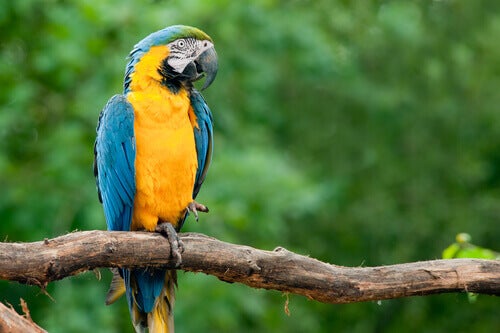 Colorful and with a very distinctive beak, these Central and South American birds are truly beautiful. In the following article, we will tell you about some of the best-known species of macaw, each one more beautiful than the next!

What species of macaw are there?

Within the parrot family, the Ara family currently includes eight species (and several subspecies). These flamboyantly feathered birds live in the trees we can find from the jungles of Mexico, all the way south to northern Argentina. The most representative macaw species are:

The Ara ararauna (the featured picture in this article), is endemic to South America. It’s spread throughout the Amazon basin and the Paraguay and Paraná rivers. In addition, it forms groups of up to 30 specimens and, like many in the family, it has a powerful beak and a long tail.

It has a yellow chest, turquoise-blue feathers, and a white face with black lines on the sides of the eyes. Its beak, neck, and legs are black, and its tail can be different shades of yellow.

There are almost no differences between their sexes. They are around 35 inches long and weigh just over 3 pounds. In addition, they mate for life and never separate. The two of them will build their nest, and incubate and feed their chicks, which are born featherless and blind.

In some countries, people call them the “Flag” macaw and it’s one of the largest of its family. This bird can be up to 3 feet tall. Moreover, its plumage is really beautiful: red on the belly, head, neck, and back, while blue, yellow, and green on feathers and tail. Its face and beak are white, and its legs are gray.

This macaw is a very social bird and it has diurnal habits. It forms flocks of dozens of individuals to forage together, protect themselves, and sleep safely. However, each group is commanded by a dominant male and there’s inbreeding among members of the same family.

Their diet is composed of seeds, fruits, nectar, leaves, and stems. They can also be seen ingesting minerals from rocks to counteract the toxins in their food. Moreover, they inhabit tropical rain forests, savannahs, open forests, and humid plains.

This is another one of the distinctive macaw species. People also know it as the green parrot and its habitat extends throughout several areas of Latin America. These birds are around 27 inches long and have a wingspan of 43 inches. In addition, it has a predominant green coloration with turquoise feathers on the wings, and a sort of red ‘mask’ above its black beak, between the eyes.

Its tail is long and pointy and its feathers ‘open up’ during flight. Its iris is pale yellow and its legs are dark gray.

This is an endemic bird of Bolivia. It lives in the forests and valleys of the Santa Cruz, Potosí, Chuquisaca, and Cochabamba departments. However, it’s an endangered species, unfortunately. In addition, it’s one of the smallest species of macaw in the world, measuring no more than 23 inches long.

Its body is mostly light green but has some orange and turquoise feathers on the sides of its face. It also has a kind of “red hat” on the top of the head. Its beak is black and it has no feathers around its eyes, whose iris is orange.

The last on the list is also called the ‘green macaw’, which inhabits the jungles of Central America, especially in Honduras. We can also find it in the Northern areas of South America: Colombia and Ecuador to be more precise. In addition, it prefers humid and low forests up to 4,900 feet above sea level.

It can be around 35 inches long and weigh up to 3.3 pounds. Its body is a ‘degradé’ of colors, since the upper part of its body is green, while the center is yellow and the lower part is turquoise. In addition, its tail can be red or orange and it has a red area above its beak and no feathers around the eyes.

It lives in groups of up to 40 individuals, can fly long distances in search of food (which consists of seeds of the mountain almond tree) and it also mates for life. Moreover, the bird couple will keep the same nest every year.

Have you seen any of these species in person? We hope you enjoyed learning about them!

All About Ara Macaws
They belong to the same family as parrots and live in the rain forests of Latin America. Ara macaws are known for their brightly colored plumage. Read more »
Link copied!
Interesting Articles
Birds
The Bali Myna: A Beautiful Critically Endangered Bird