The American pygmy kingfisher is the miniature version of the common kingfisher, and both have a colorful and striking plumage. This bird extends throughout most of the entire American continent. 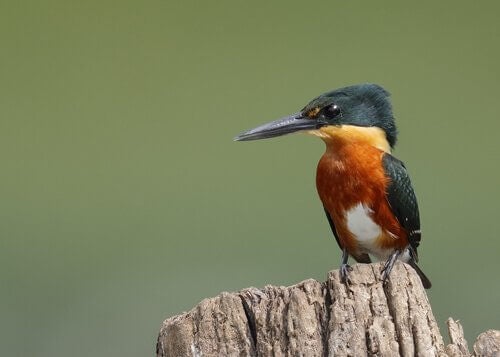 The American pygmy kingfisher is the miniature version of the common kingfisher. They share many characteristics, but their main difference is the size.

The American pygmy kingfisher is a rather colorful bird who belongs to the family Cerylidae, and its scientific name is Chloroceryle aenea. Its head and wings are olive green, and its body and neck is bright yellow, almost orange, with a white spot on its stomach.

Despite its small size, the bird has a fairly long beak that facilitates the catching of its prey. This tiny bird can reach a little bit over 5 inches long and weighs less than an ounce.

There are not many differences between the males and the females of this species. The only noticeable one is a narrow green band on the female’s chest. The young are very similar to the adults, and they’re only clearly differentiated by the size and opacity of their plumage.

Distribution and habitat of the American pygmy kingfisher

It mainly inhabits the tropical forests of the American continent. That is to say, from the south of Mexico to the center of Brazil, all the way down to South America in Ecuador and the north of the Andes. They can also be seen in the Caribbean archipelago by Trinidad and Tobago.

Their general habitat includes dense forests and mangroves with nearby water sources. The bird is so small that it’s easy to lose sight of it among the dense vegetation of its habitat, so it’s difficult to spot one. In addition, they usually fly at low altitude and remain hidden in the branches, or on the ground.

This bird usually lays three white eggs, and sometimes even four, during each mating cycle. Their nests are tunnels of about 16 inches long, built on the banks of the rivers, in order to be as close as possible to their food sources. In some cases, they also take advantage of termite mounds for building their nests.

Their songs are usually a combination of short and quiet notes, although they can also sing fast and high notes.

The American pygmy kingfisher feeds on insects and fish that hunt on the banks of the rivers, such as cockroaches, trout, aquatic beetles and larvae. They wait patiently in their branches until they spot prey to catch. As soon as they detect one, they rush to the water to look for it, although they never submerge more than 10 inches deep.

Despite their small size, these birds are quite territorial. If they have to, they’ll defend their territory fervently. Moreover, they take control of specific areas in the nearest rivers, where their main source of food is.

This is because they must ensure a continuous consumption of food, which must be at least above 60% of their body weight. Therefore, fights with other pygmy kingfishers are frequent.

Because of its diminutive size, the American pygmy kingfisher has a wide variety of predators. The most common ones are hawks and snakes. Generally, when detecting a threat, this species of bird, like many others, moves quickly, almost erratically, in order to mislead a hunter. They also emit several warning sounds until the threat ends.

Climate change is affecting this bird negatively because they’re extremely sensitive to changes in temperature, especially lower ones. In other words, extreme climate has gradually reduced populations of this species.

However, the American pygmy kingfisher is not at risk, according to the International Union for Conservation of Nature (IUCN).

Giant Kingfisher: Habits and Reproduction
The Giant kingfisher is a bird that was spotted for the first time in 1769. It's the largest specimen in the kingfishers' family and is quite striking. Read more »
Link copied!
Interesting Articles
Birds
Diurnal Birds of Prey, Rulers of the Summits