Discover the Power of Poisons as Medicines

Poisons present an incredibly complex variety of compounds developed over several millennia of evolution. Some 100,000 animals, from lizards and snakes to sea anemones and jellyfish, produce poisons. So, let's take a look at the power of poisons as medicines. 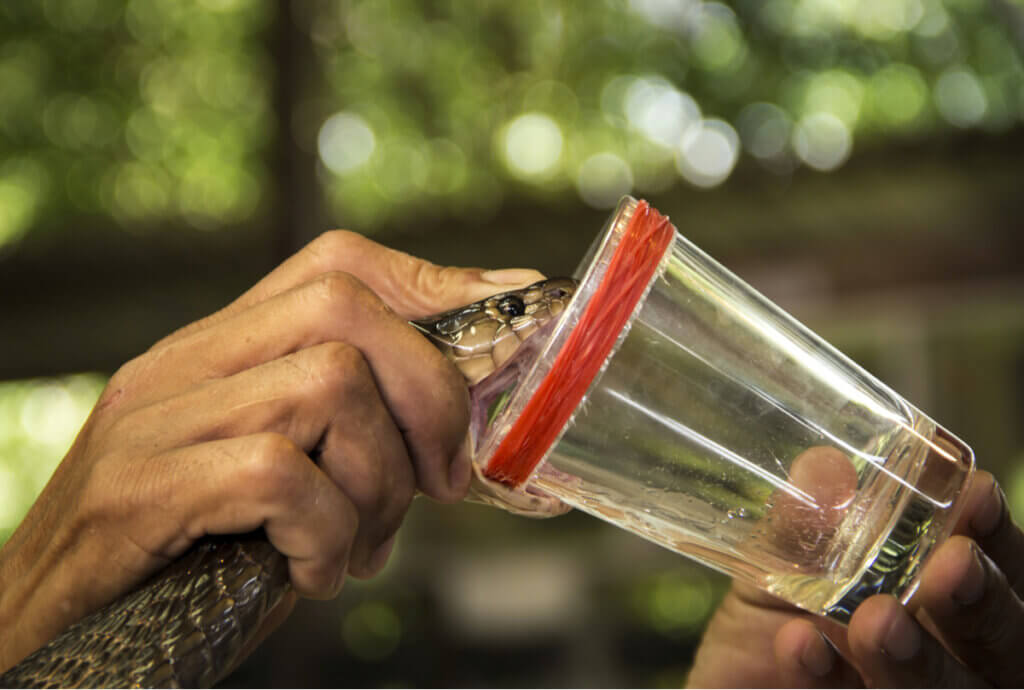 Animal poisons are effective weapons of defense or attack that allow for immobilization and/or digestion of prey. In fact, these compounds are complex mixtures of molecules with very diverse and specific functions. For thousands of years, people have used snake venom as therapeutic tools, especially in traditional Chinese medicine. In fact, their repertoire is so vast that experts have only identified and characterized less than 0.01% of these toxins. Below, we’ll take a closer look at the use of poisons as medicines.

Preventing coagulation in prey is a hidden trick in animal venom

It’s common for some of the components in the poison of various animals to contain peptides or substances with an antiplatelet aggregation effect. For this reason, they exert their effect by delaying blood clotting.

Thus, compounds such as apitoxin have been discovered in bee venom. Similarly, there are analogous elements in spiders, scorpions, sea cucumbers, caterpillars, and especially in some snakes, such as those of the genus Bothrops.

Other anticoagulant compounds are also in the salivary or exocrine secretions of some vampire bats (Desmodus rotundus and Desmodus rujus). They’re also part of the feeding strategy of hematophagous insects such as Rhodnius prolixus or intestinal parasites such as Ancylostoma ceylanicum and Ascaris.

The therapeutic application of antiplatelet therapy based on venom components

Platelet aggregation inhibitors help prevent blood clots from forming. The following drugs are based on isolated components of snake venom. They have FDA (Food and Drug Administration) approval for therapeutic application:

Other examples of successful uses of poisons as medicines

Currently, many other components of snake venom are involved in pre-clinical or clinical trials for a variety of therapeutic applications.

The following examples show that venom can be a valuable source of new major components in drug discovery. It’s usual to cite the case of antihypertensive drugs:

Captopril has been used successfully in the US and the UK for about 40 years and has also prompted the search for more novel drugs in snake venom. Below are a few more:

Poisons as medicines for the treatment of multiple sclerosis

Today, scientists are studying drugs derived from the solar anemone. This species stuns its shrimp prey by contact with long tentacles and its powerful toxins then block the prey’s nerve channels. Now, scientists have managed to synthesize safer versions than the original.

The new synthetic version of the anemone venom dramatically reverses the paralysis that accompanies multiple sclerosis in rodent models. Although it’s too early to say how useful this poison derivative will be in the long term, human trials are also currently underway,

In the search for compounds that can be useful in the treatment of cancer, it makes sense to examine snake venom. That’s because it may contain hundreds of chemical compounds of medical interest.

Groups of scientists claim that some snake venom – applied at the proper dosage – can kill breast and colon tumors quickly. However, they admit that trials are still in their early stages. For now, they obtain results by means of in vitro tests, that is, in cell cultures of human origin.

More recently, the venom of certain spiders and its effect on the treatment of glioblastoma has been characterized, with promising results. Of course, the world of animal venom still has many surprises in store for us.

As we’ve been able to read in these lines, there are hundreds of paths open in terms of medical research regarding animal poisons as medicine. Only time will tell how many of these toxins will end up saving human lives.

Sea Snakes: Poisonous and Paradoxical
Closely linked to the cobras, sea snakes differ from their terrestrial relatives in that its body is adapted to withstand immersion in deep waters. Read more »
Link copied!
Interesting Articles
Birds
The Effects of Climate Change and Plastic Pollution on Seabirds