In certain parts of the oceans, phenomena caused by cold water currents cause an explosion of marine fauna of all kinds. 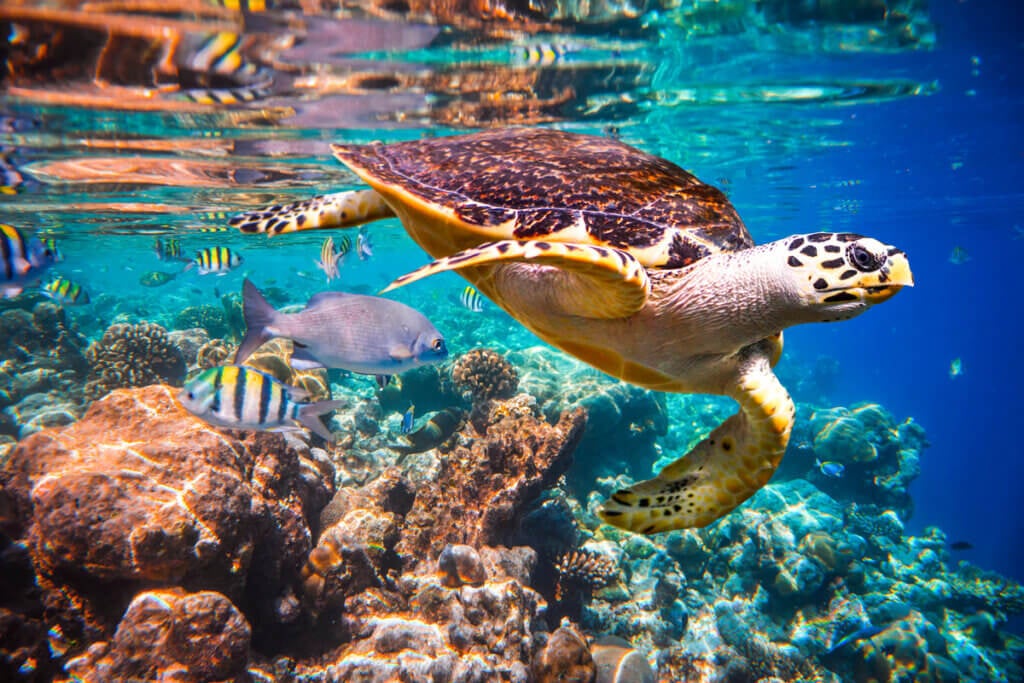 In certain parts of the oceans, there are high numbers and a great variety of animals. This is a product of the ocean currents. What’s more, it’s also the result of all the ecological and trophic factors that contribute to the different ecosystems. Naturally, the more food a water current provides, the more marine fauna will proliferate.

But what is the phenomenon that produces this explosion of life? How is the sea fauna related to ocean currents? Read on and we’ll tell you.

The secrets of the ocean conveyor belt

In our oceans, there’s a system of marine currents that circulate water throughout the planet. This process, known as thermohaline circulation, is one of the main drivers of ecosystems as we know them.

This is a relatively complex phenomenon. However, we can look at it as a huge conveyor belt of water driven by the sun. First, the sun heats the water near the equator. Then, due to the rotation of the earth and its inclination, this hot water moves in a western and northern direction. In other words, toward colder water.

This is the case with the well known Gulf Stream, whose warm waters provide Europe with the relatively hot and humid climate it has, considering its latitude.

These warm currents, upon encountering the colder waters of the polar areas, slow down and sink. As they sink, this huge body of water travels in the opposite direction (approximately) to the warm current, creating a continuous circulation of water throughout the oceans.

This movement of waters generates a multitude of climatic and ecological particularities. This is because the temperature of coastal waters has an enormous impact on the marine fauna that can develop there.

Now that you understand the phenomenon of marine currents and what produces them, you can understand that there are two types of currents in oceans. On the one hand, cold, deep currents and, on the other hand, warm, superficial ones.

This will help us understand the phenomenon that causes an enormous amount of fish, cephalopods (such as octopus), and shellfish to gather in one place: cold upwelling.

On the left side of the continents, some cold currents run parallel to the coast and have an associated gust of wind. This wind current interacts with the seawater. As a result, a physical phenomenon causes the deep waters of the current to rise to the surface near the coast.

But…what is it about these cold upwellings that makes them so attractive to marine life? In the following section, you’ll find out.

The relationship between upwelling and marine fauna

The enormous variety of life forms in the ocean makes it very difficult to explain, in a general way, the phenomena that affect marine life.

However, all the organisms that inhabit the world’s seas and oceans have one thing in common: When they die, their remains sink to the bottom of the sea. Therefore, in this ecological stretch, biological remains of animals, small and large, accumulate and can be used.

The emergence, or upwelling, of cold waters pushes these nutrients to more superficial areas. This is where plankton comes into play, tiny invertebrates that are the basis of the oceans’ food chain. Therefore, in these areas of upwelling, the plankton takes advantage of the nutrients in order to increase its population, according to numerous studies.

This increase in population, of course, benefits the rest of the food chain. This includes all kinds of larger organisms, such as fish or arthropods like crabs, spider crabs, or lobsters.

Therefore, upwellings recirculate the nutrients that remain at the bottom of the sea, creating areas where the marine fauna is tremendously abundant and diverse.

The reason behind many fishing grounds

Naturally, this phenomenon is what makes certain areas of the seas and oceans tremendously rich in fish. Thus, the coasts of Chile and Peru are a privileged place for fishing, as there are enormous schools of fish whose existence depends on these cold waters.

The same happens in the North Atlantic, for example on the coasts of Galicia (Spain), which are well known for the quality and quantity of their seafood.

In conclusion, we can observe how the marine currents have a decisive influence on the aquatic fauna that we can find. Likewise, these currents have a huge effect on our climate and ecosystems.

As you know, the melting of the poles caused by global warming may greatly affect the flow of the Gulf Stream, with disastrous consequences for the climate. It is everyone’s task to prevent the earth from continuing to heat up and to prevent the total collapse of the ecosystems.

The Importance of Krill in the Ocean’s Ecosystems
In this article, we're going to talk about krill and the importance of their role in our ocean's ecosystems. Read on to learn more about what they do! Read more »