The fauna of the Great Barrier Reef

There are many endangered species that live within this ecosystem. It's 1600 kilometers are protected by law. 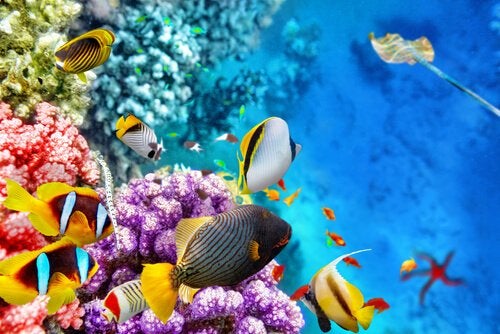 The Great Barrier Reef is the largest underwater habitat on earth. It’s so big that astronauts claim they have no problem seeing it from outer space. It’s so amazing that hundreds of animal species inhabit this amazing ecosystem. Continue reading this article to learn about the fauna of the Great Barrier Reef.

This enormous reef is located in Oceania, specifically northeast of Australia. It’s difficult to calculate its surface, but its longer than 2,600 kilometers. In reality, it’s not one complete reef, but a combination of more than 2,000 individual corals and almost 1,000 islands.

Many people consider this ecosystem as the largest living being on Earth. It’s one of the greatest places to find a wide variety of life due to its large size, temperate, tropical climate, and geographical location.

At the Great Barrier Reef, there isn’t just life under the sea. Many species of birds also live there due to all the underwater activity. At the same, many semiaquatic land animals — such as crocodiles and turtles — live there too.

The protection of natural parks

The Great Barrier Reef was declared a natural park in 1875 and a World Heritage Site in 1981. This means that it’s legally protected against mankind from tampering or destroying it.

It’s an area of the planet that attracts scuba divers and tourists. Even though humans do visit the reef, their activity is highly regulated. For example, ships are not allowed to dock on any coral and there is limited tourism.

Also, fishing is prohibited, so all the animal species that live in this ecosystem can survive and reproduce without ever feeling threatened. This is extremely important because some of the creatures living there are in danger of extinction.

The fauna of the Great Barrier Reef

Animal and vegetable life are abundant in this unique place. There are some migratory animals, but others spend their entire lives on the reef. Some are even endemic, meaning this is the only place on the planet that they live. The following are some species you can find at the Great Barrier Reef:

Cetaceans and other large mammals

Humpback whales are one of the largest cetaceans on the planet and they also live in the Great Barrier Reef to reproduce. Dolphins, minke whales, Hong Kong pink dolphins, and dugongs are also found there.

Apart from cetaceans, there are also other large marine animals: almost thirty sharks and stingray species. White sharks, tiger sharks, and even hammerhead sharks live in this ecosystem.

Six species of marine turtles live in this enormous reef. Among them are the hawksbills and the lute, which are in critical danger of extinction. Saltwater crocodiles also live in the mangroves near the reef.

15 species of marine snakes are also among the fauna that live in the Great Barrier Reef. Sea snakes are descendants of terrestrial snakes and swim as deep as 50 meters and measure around two and a half meters long.

There are more than 1,500 species of fish living in the reef. Some are as unique as the toadfish or the humphead wrasse, while others are as common as the clownfish or the blue surgeon. They come in all sizes and colors. Many are very astonising and have unique colors, like the mandarin fish.

There are also nine species of seahorses, 400 species of mollusks, 1400 varieties of coral and the plankton is so abundant that humpback whales come to the waters just to eat. Plus, giant clams are among the most amazing mollusks in the Great Barrier Reef.

There are more than 20 species of seabirds that live throughout the reef, in addition to almost 50 species of shorebirds. These birds feed off sea creatures, but nest in the islands that surround the reef. Also, some thirty species of migratory birds pass through there during long flights.

The Great Barrier Reef is considered the largest living being on the planet because of its biodiversity both under and above its waters. It’s has been protected by law for almost half a century but, unfortunately, it’s still in danger. Caring for the ocean is everyone’s responsibility, especially for ecotourists that visit this special place.