The Most Common Fish Diseases

Some health problems that affect fish can lead to death and some can be very highly contagious. Read on to find out all you need to know. 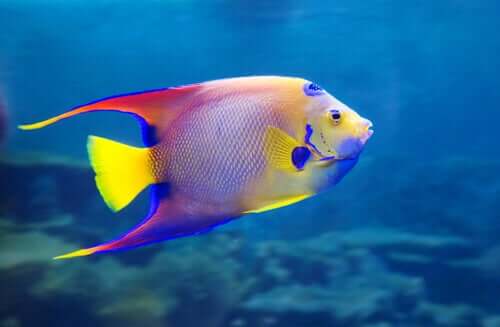 Keeping an aquarium is no easy task, and if you’re thinking of getting one, there are few things you should learn about first. One of these is what the most common fish diseases are. Regardless of whether they’re warm or cold water fish, there are a number of different health problems they can suffer from. Find out more in this article.

The 7 most common fish diseases

If one fish gets sick, they might also infect the other fish. This is why it’s very important to pay close attention to your fishes’ behavior or physical changes. Here’s a list of the most common fish diseases to look out for:

1. Disease caused by the ‘aquarium environment’

When the water’s pH is greater than 9 or less than 5.5, this can kill the fish. This is because the aquarium environment gets filled with nitrites and ammonia, which are poisonous and deadly.

Although it isn’t a disease in itself, it can cause serious problems for the fish and you should take precautions. When does the water’s pH change? When there’s too much decomposing organic matter, when the filters aren’t working properly, when there isn’t enough oxygen, or when someone smokes near the aquarium.

This is one of the most common fish diseases, but it’s also one that can be easily prevented and treated. The fish’s fin becomes dull or white, becomes inflamed, and looks ‘frayed’. In some cases, it may have blood on the edges. If the fin continues to erode and the rot reaches the base of the tail, this can be fatal.

Overcrowding, poor quality food, fighting with other fish, or poor water quality are all main triggers for fin rot. Treatment involves antibacterial drugs and the condition can be prevented by regularly cleaning or changing the water.

You can’t put tap water in an aquarium without first removing as much chlorine as possible. Chlorine is put in water to stop rotting and prevent bacteria from growing. However, it can be deadly for fish.

Symptoms of chlorine poisoning include the destruction of their gills, sunken eyes, discoloration of the skin, loss of coordination, and spasms. To avoid this, let the water stand for 24 hours before pouring it into the aquarium.

This is more common in goldfish and betta fish, but it can occur in any species. A fish with swim bladder disorder won’t be able to move properly and will either sink to the bottom or float backward. They’ll have a swollen abdomen and it will require a lot of effort for them to swim.

One of the main causes of this is overeating. Perhaps you’re giving them too much food or they’re stealing from their companions. Other triggers can be the presence of parasites or bacteria or birth defects.

This disease can also occur in the sea, passed on by a fish that is already carrying the bacteria.

However, tuberculosis can also be transmitted through the ingesting of infected material. Symptoms include dull color, ulcers, shedding scales, loss of weight, and deformation of the spine.

Parasites or worms can cause several of the most common fish diseases. In the case of flukes, they enter through the fish’s gills or stay stuck to the skin.

If any of your fish scratch against the glass or another object, move their gills overly quickly, have reddish, pale, or discolored skin, and their fins are frayed, it could be due to this parasite.

Another disease-causing parasite is the protozoan Ichthyophthirius multifiliis, which infects the epidermis of the gills and fins by feeding on tissue and skin. This infection is known as ‘white dot’ because of the spots that can be observed on the fish’s body.

8 Amazing Freshwater Fish
If you are thinking of setting up an aquarium at home, the easiest way is to choose freshwater fish. Find out here about the most popular choices. Read more »