Discover Nudibranchs: The Jewels of the Sea

One of the most fascinating beings to inhabit the aquatic environment are nudibranchs. Despite their small size, these sea slugs have impressive defense systems. Today we'll tell you more about these jewels of the sea. 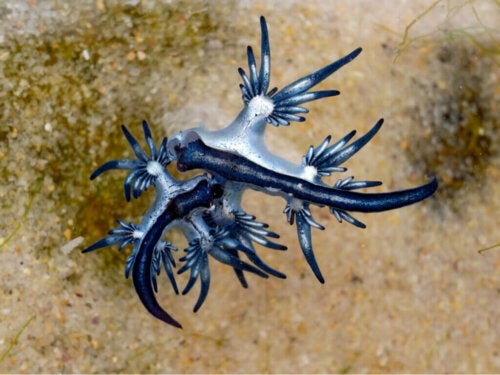 Oceans represent the most varied ecosystem that exists in the world. The aquatic beings that inhabit their waters possess an enormous diversity of colors, forms, means of feeding, and defense mechanisms to ensure their survival. This environment is home to the most striking and rare organisms you can imagine, from transparent beings to abyssal fish with organs that emit light. But today, we want to tell you about the jewels of the sea: the nudibranch.

Nudibranchs are popularly known as sea slugs. They’re mollusks, such as clams and squids, of the gastropod class that inhabit the surfaces of the seafloor. The name nudibranch means “naked gills”, because these animals expose their gills outwardly, in the form of feathers on their back.

The general characteristics of these jewels of the sea

The main particularity of these beings is the variety of colors and forms they have. During the larval stage, these organisms have an embryonic shell, which they lose as adults.

Therefore, the adult forms don’t have a shell and are quite similar to the land slugs that we all know. They move around thanks to a muscular foot that releases a mucous substance that allows them to support themselves and move around the substrate.

Although these animals are blind, their eyes only serve to differentiate light from darkness. At the same time, they have two antennae called rhinophores. These “horns” function as sensory organs and don’t only allow them to detect food but also to find other nudibranchs to mate with.

Due to the absence of a shell, which in other animals serves as protection, these organisms have had to adopt other techniques to defend themselves against predation. For example, the secretion of highly toxic compounds. For this reason, some species are very poisonous.

Normally, these creatures are benthic, that is, they live attached to the surfaces of the seafloor. Others are pelagic and move through the shallower saltwater columns. As for their size, they vary greatly, as there are nudibranchs that can measure a few millimeters while others reach nearly 16 inches in length.

These mollusks are hermaphroditic beings, that is, male and female at the same time. They need another individual to reproduce and, when they find one, they fertilize each other.

Nudibranchs can lay millions of eggs, thus increasing their chances of survival.

Their diet is based on eating other invertebrates, making them carnivores. Observations have also revealed that they include algae and corals in their diet and even eat other nudibranchs or their eggs. They catch their prey thanks to the radula, a structure with small teeth located in the mouth of these mollusks.

Some species accumulate stinging cells from polyps or sponge spicules. In this way, they’re able to incorporate them into their body and later use them to defend themselves.

Diversity of colors and shapes

There are more than 3,000 known species of nudibranchs colonizing all of the planet’s oceans, both in warm or cold waters and at different depths. However, scientists speculate that there are 3,000 species more that they have yet to discover.

What stands out most about these beings is the diversity of forms (they can be smooth or rough, flat or fleshy, and long or short) and also the coloring they have. However, we must be careful with these wonders of the marine ecosystem, because this chromatic variety warns us of their danger since most are poisonous.

Therefore, these animals are a clear example of aposematism, a defense system in which a dissuasive property is related to a warning signal. In addition, they are endowed with multiple structures and characteristics that help them to go unnoticed by their predators:

Within the group of nudibranchs, there are many different species. For example, some are harmless but imitate the appearance of toxic species in order to appear dangerous:

A gift for the eyes

As you can see, the marine ecosystem is the most varied that exists. And of all the organisms that live in it (despite their methods of camouflage) the nudibranchs certainly do not go unnoticed. These jewels of the sea are a gift to the eyes.

Thanks to the heterogeneity of their appearance, forms, and colors, they are certainly unique beings. Their characteristics show that, in the end, size isn’t an impediment if an animal possesses the most effective strategies and the most persuasive defense mechanisms.

To conclude, we want to emphasize that the same methods that allow them to go unnoticed also make finding and identifying these jewels of the sea so difficult.

Sperm Whales – The Giants of the Ocean
Sperm whales are huge and the size of their brain exceeds that of any other creature on Earth. They can descend to almost 1,000 meters deep. Read more »
Link copied!
Interesting Articles
Invertebrates
Cockroaches: 6 Types and Characteristics