Have you ever wondered how silk is made? Today, we'll tell you all about how silkworms work to produce the precious thread that goes into our finest clothing. 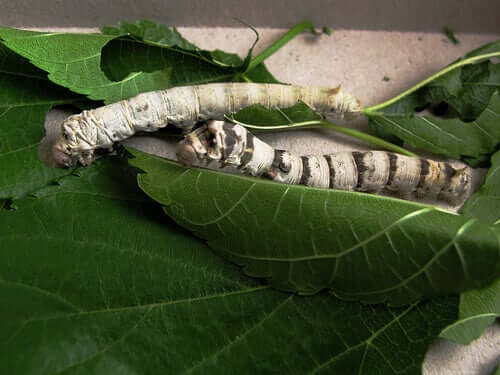 Just like bees produce honey and snails produce slime, silkworms produce an element that has been valued since ancient times. In today’s article, we’ll tell you how silkworms work and how they’ve been important for the human race.

Silkworms and their use

The species responsible for producing silk is known as bombyx mori, and the first person to make use of its product was in 2700 B.C. Supposedly, Hsi Ling shi, a 14-year-old girl and the girlfriend of the Chinese emperor Huang Ti, was the first to create a spool of silk.

Later, sericulture, the cultivation of silkworms, extended throughout the Asian continent. Then, around the year 139 B.C., the most famous trading route in the world came into existence. The Silk Road, or Silk Route–even though it also involved the trade of other products–connected China with the Mediterranean Sea.

By the year 300 A.D., the “secret” of silkworms had already spread throughout the known world. However, it was Europe that made advances in silk production between the 18th and 19th centuries, especially in England. The English had mechanical looms and roll-stamping. It’s worth pointing out that today, sericulture takes advantage of both modern and ancient techniques.

In 2005, the annual production of this precious thread reached 125,000 tons, with China and India as the main manufacturers. Today, silk is used to make suits, jackets, ties, shirts, gloves, tablecloths, scarves, and much more.

Step by step: How silkworms work

During the spring, females silk moths lay approximately 400 eggs. After 10 days, the larva task commences, and, for that, they need plenty of food. In fact, they consume 50,000 times their weight in plant material–specifically, leaves from the mulberry tree.

After 6 weeks of eating almost all day long, the caterpillar reaches its maximum size and changes color. At this point, it attaches onto a branch, bush, or tree because it’s finally ready to build its chrysalis.

Silkworms work very hard for the next 4 days. During this time, they must weave a fibrous cocoon around their bodies. This cocoon consists of a long single thread of silk which can measure up to nearly a mile long. The entire process is truly fascinating, as silkworms work tirelessly in order to produce their precious silk.

It’s the glands situated around the silkworm’s digestive tube that are responsible for producing this incredible resistant thread. The silk then passes through a special orifice near the silkworm’s mouth.

The inside of the silkworm’s body is replete with liquid silk, which quickly hardens when it comes into contact with their air. It has a viscous and sticky nature, thanks to the rubber that also forms in this process.

The cultivation of the silkworm’s silk

This only happens in nature, as silk producers “finalize” the task in order to prevent the moth from leaving its cocoon and secreting an acid that breaks it. To do so, manufacturers submerge the cocoon in boiling water, thus killing the insect and preserving its precious thread.

Some don’t even reach this stage since manufacturers immerse them in an acidic solution and extract their silk glands. These are converted in threads known by the name of silkworm gut. Up until not long ago, doctors used this thread in order to perform sutures. Today, however, fishing enthusiasts are the exclusive users of this material.

Of all the silkworms that exist in a factory, only a small percentage is allowed to survive in order to reproduce and preserve the species. However, the lives of these small creatures are very short. Females die as soon as they finish laying their only batch of eggs.

Finally, in order to obtain silk, manufacturers unwind the silkworm fiber by soaking the cocoons in warm water. This allows them to find the end of the string and place it in a spool. In most cases, it takes the production of up to 8 silkworms to make one spool. Manufacturers then dye this thread and use it to make fabric.

The Incredible Odyssey of Monarch Butterflies
Monarch butterflies are famously known for their bright colors and the massive migration some of them take to escape the winter. Read more »
Link copied!
Interesting Articles
Invertebrates
Waggle Dance: The Dance of the Bees