Is the Iberian Lynx about to Become Extinct?

The Iberian lynx is about to become extinct due to various threats such as poaching, encounters with vehicles, the decrease in the population of the Iberian rabbit, its main prey, and of its ecosystem -- due to industrial agriculture. The government is taking hopeful steps to recover the species. 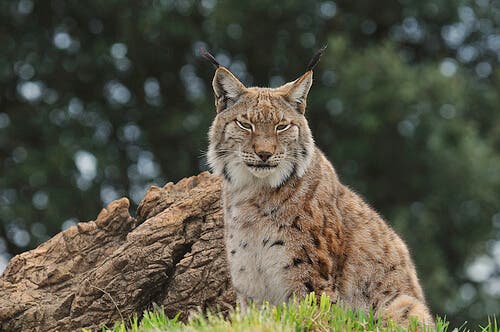 The Iberian lynx is one of four feline species in the genus lynx that still inhabit the planet. This is the most threatened of them all, unfortunately. Many people wonder whether we’re looking at the last specimens of this feline species or if we can, in fact, prevent their extinction.

The Iberian lynx, a threatened species

This species is a vital part of the Iberian fauna. It’s smaller than its European counterparts. They have broad beards and brown fur and feed mainly on rabbits, other small mammals, and birds.

In the past, the Iberian lynx (Lynx pardinus) roamed around the Iberian peninsula and part of France. However, their distribution decreased from the end of the 20th century to the last decade of this past millennium. Estimates indicate the population went down by about 50%.

This meant that in Spain only three viable subpopulations remained in the south of the country, especially in Doñana and Sierra Morena. Its population would be categorized as endangered in 1986 and then critically endangered, the last category before declaring a species extinct.

How did the Iberian lynx come to this situation?

The threats that brought this feline to the brink of extinction are several, but poaching is the most notable. This, even though it comes with hefty criminal charges. The Iberian lynx also get run over by motor vehicles often so these accidents are one of the greatest threats to them. This is due to their need to cross roads to look for food.

Tuberculosis is another mayor threat and so is the low presence of rabbits. In addition, the Iberian rabbit (their favorite meal) has been affected by several disastrous viral diseases — hemorrhagic viral disease and myxomatosis among them. There are vaccines for rabbits but they’re quite difficult to apply to such wild animals.

Human daily consumption is also having an impact on the Iberian lynx. In this case, it’s because intensive livestock farming is displacing their prey and reducing their distribution. For instance, the illegal drainage of Doñana National Park in Andalusia, in southern Spain. It’s for the purpose of growing strawberries and other red fruits but it seems to be destroying this animal’s main sanctuary.

What can we do to remedy it?

The captive breeding program is one of the main solutions put in place. It has allowed dozens of specimens to go back to the wild each year. In fact, many of these felines are now reproducing in their natural habitat.

Another main line of action has been the signaling of black points. Also, the creation of wildlife crossings and eco ducts. These two pieces of infrastructure would allow reducing the number of car-related killings. This is because they take dozens of lynx lives each year. In fact, this is one of the current weaknesses of conservationists because the deaths have increased by 300%.

The fact that human society positions itself against animal abuse and poaching helps their case. However, as we mentioned above, our consumption affects all species. The importance we place on our shopping cart might just be the main cause of species extinction. Something to take it into account.

What is the future of the Iberian lynx?

The truth is that despite the delicate state of this species, there’s hope for them. In 2015, the Iberian lynx was reclassified as an endangered species. That is to say, their degree of endangerment decreased — the population has been increasing in the past 10 years.

Meanwhile, Portugal signed a pact for the conservation of the species and Andalusia and Murcia established a collaboration agreement for the protection of this animal. Also, the breeding program has paid off. The Iberian lynx seems to be returning and has even been seen around.

Finally, there were barely less than 100 specimens left at the beginning of this century and after 15 years their population is now closer to 600. There’s still much to do about it, but it seems we’re not currently looking at the last Iberian lynx. At least at the moment.

Species of Lynx
The Iberian lynx is quite well-known because there are many other species of lynx, and together they have managed to dominate a large part of the planet's ecosystems. Read more »
Link copied!
Interesting Articles
Birds
Differences between Black and White Swans