Klepetan and Malena, Two Birds that Love Each Other

These storks are the protagonists of a story about absolute fidelity. The wounded female continues to count on her partner after 14 years. A Croatian farmer named Stjepan Vokicm takes care of Malena during the winter while Klepetan is away on his migratory journeys. 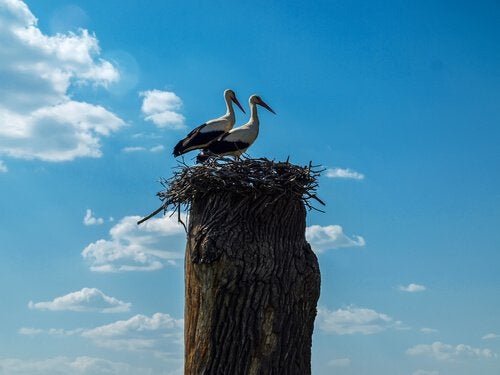 The white stork is one of the most symbolic birds in several European cultures. In Croatia, there are two birds of this species that appear to be in love. Although it’s well known that the white stork (ciconia ciconia) is a monogamous bird in the animal kingdom,  which they stay with the same partner during their entire life.

The Story of Klepetan and Malena, Two Birds that Love Each Other

This is the story of Malena and Klepetan, a white stork couple that lives on a rooftop in the town of Slavonski Brod in east Croatia. For 14 years, these two birds that are in love live in a nest during each breeding season, where they have raised more than 60 chicks.

The story shouldn’t surprise you if it weren’t for the fact that Malena can’t fly because she was shot by a hunter years ago. However, that doesn’t prevent Klepetan from returning each year to mate with her. The male bird still migrates every winter from Croatia to southern Africa.

As incredible as it may seem, Klepetan travels more than 10,000 kilometers each year to go back to Malena and spend the breeding season with her. He gives her affection and helps bring a new batch of chicks into the world.

To understand the trip that Klepetan makes every year, remember that the white stork is a Saharan migrant. White storks travel from northeastern Europe to the Nile River valley, the Great Rift Valley, or even to South Africa.

This trip causes many storks to stop in Spain. In recent years, the number of Iberian birds that stay in Spain has increased. However, Croatian storks continue to migrate every year.

These birds allowed people to discover the concept of migration. During the nineteenth century, there were several sightings of storks returning from mysterious journeys, with African arrows stuck in them. Suddenly, something as unfortunate and lucky as a stork surviving from getting struck by an arrow, allowed many Europeans to discover migration.

A Farmer and Two Birds that Love Each Other

In this story there is a third player. Between these two birds in love is farmer Stjepan Vokicm, who is now retired. He takes care of Malena during the winter, because she can barely get food on her own.

Stjepan has even built a catwalk so that Malena can get to the nest on his roof. That’s because it would be impossible for her because she can’t fly. It also ensures that everything is ready for Klepetan’s arrival. Also, it even helps them get food during the breeding season because Malena would normally help Klepetan forage for food for the chicks.

Two birds that are in love…and famous

Thousands of Croatians follow the story of these two birds in love each year. Malena and Klepetan have become a sensation. So, they even have sponsors. Also, they even serve as ambassadors of these misunderstood migratory birds, because many people still shoot them because of the huge nests they build on rooftops.

The truth is that while in some places, people still think badly of these birds, these two birds that love each other are an example that the behavior of storks is incredible. It can also help them gain popularity. In European places such as Alsace, they are symbolic. However, in this Croatian region, Malena and Klepetan have their own web page on social media.