China will Preserve More Habitat for the Giant Panda Bear

China has taken the decision to build a large reserve to house the giant panda bear. This is due to the fact that this species is threatened by poaching and climate change, among other causes. The country will invest 1.6 billion to increase the population of these animals to at least 3,000 in the wild. 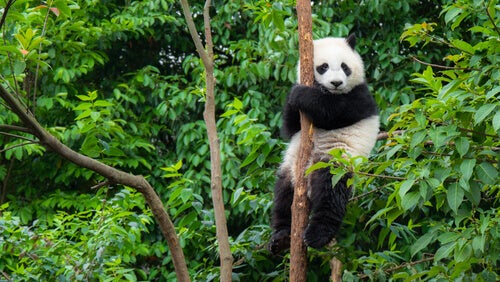 The giant panda bear has become a symbol of the worldwide conservation of wildlife over the years, but also of all wild animals in China. This is why this country announced plans to preserve a large part of this animal’s natural habitat.

The giant panda, an endangered species

The panda bear has undergone a definite threat for decades; no doubt most people think this animal was in danger of extinction. However, the situation is gradually reverting thanks to China’s enormous conservation plans.

The situation changed to the point that the giant panda is no longer an endangered species. Even though this animal is quite vulnerable to human activities, according to the IUCN and its red list, amazingly, its population is slowly increasing.

China invested millions in this species to create a reserve for the giant panda in order to resolve this situation. Then, they created many others. Together with these measures, the captive breeding program and the protection of its habitat seem to have saved the species.

Chinese law became very rigid and even established the perennial chain for poaching. Thus, the hunting of this animal seems to have disappeared. Even so, breeding them in captivity is difficult due to their extreme shyness. It’s a species that’s truly affected by its loss of suitable habitat.

After all these measures, the giant panda population now exceeds 2,000 specimens. Some believe there could be about 3,000 panda bears in the wild. This is just an unconfirmed rough estimate though.

However, China isn’t stopping at there. In fact, they’ve decided to invest $1.6 billion in a giant panda reserve. The Panda National Park will measure over 16,000 square miles. (This is about three times bigger than Yellowstone Park in the USA.

The main objective of this park is to merge the habitat of several subpopulations of this animal in a single reserve for the giant panda. Sichuan and Shaanxi contain most of the world’s panda bears. Thus, there’ll be giant wildlife passages for them.

Protected areas such as this are vital for species like the panda. In fact, a reserve for the giant panda will allow them to travel hundreds of miles without running into human activity.

Given the shyness of this species and how much the presence of humans affects them, this measure could enhance their reproductive capacity.

Climate change is a new threat to this animal

This is another reason to create this reserve and it seems to be one of the new threats to the panda bear. Thus, it could put an end to most of the bamboo forests inhabited by this species.

The creation of a reserve for the giant panda could prepare them for the hard changes their ecosystem will experience. The changes in temperature will affect the bamboo, the plant that constitutes 99% of this animal’s diet.

This panda reserve will cover 67 of China’s nature reserves, which will benefit many species of wild animals in addition to the Asian bear. Chinese authorities assure that this measure will also benefit the human inhabitants of this area.

The Panda: Characteristics, Behavior and Habitat
The panda, also known as the "giant panda" is a unique mammal known for being at the top of the list of endangered animals for more than twenty years. Read more »
Link copied!
Interesting Articles
Mammals
Meet the Squirrel Monkey