Friends Forever: Romeo the Wolf and His Dog Friend 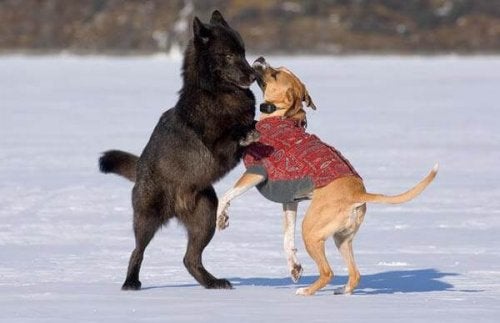 Friendships between animals of different species are always surprising. And when they happen unexpectedly, they’re even more interesting. It’s understandable that when two pets live together, even if they don’t get along to begin with, they end up forging a friendship.

But when it happens between two strangers, it’s a different story. Read on and be touched by the intimate friendship Romeo the wolf and this dog share. It happened rather strangely…

The beautiful friendship between Romeo the wolf and a dog

On one normal day like any other, Jans, who lives in the mountains with his dog, had a very special visitor. While Jans and his dog were sitting on the porch, a wolf came out of the forest. He stopped and looked at them.

The dog, bravely, and without thinking, went towards the intruder to see who he was, smell him, and find out what he was doing.  Jans feared for his dog’s life. However, the reaction of both animals was completely unexpected.

The two started to play and so began a beautiful friendship. Ever since that day, the wolf constantly appeared at Jans’ house. It happened so often that he decided to give him a name: Romeo the wolf.

It seems pretty strange to find a wild animal like a wolf who’s pleasant and friendly with people and other animals. But Romeo is all that and much more. It caused a great stir in Jans’ village, Juneau. So much so that it’s become a tourist attraction. All the visitors want to meet him.

There’s more, too. Village locals and tourists with dogs all bring them to play with Romeo. They’ve gotten some amazing photos out of it that later went viral on the internet. Although in the beginning they are intimidated by Romeo’s grand, elegant presence, they soon realize that he’s just like a playful puppy.

Playing with Romeo the wolf

Furthermore, it’s not just dogs who play with Romeo, but people too! He loves to run with them, leap around, and be loved. He’s won over everyone’s hearts. After all, a wolf is nothing more than an undomesticated dog.

In fact, Jans recalled one time when Romeo stole a float from one of his friends and went to hide it. He was scared at first, but later realized Romeo was just acting like a dog.

Even though he’s always lived in his natural habitat, Romeo somehow is able to understand what humans say and obey commands. Jans has spoken on the unique union of the three very different species: wolves, dogs, and humans.

Now, six years after when Romeo first appeared, his behavior is exactly the same, breaking down prejudices. If we stop to think about this story, the only ones who showed any prejudice towards Romeo were people: first Jans, and later the villagers.

However, neither the dog, Jans, nor any of the villages or tourists want to stop playing with the playful wolf. Animals can teach us valuable lessons. The dogs didn’t care about Romeo’s appearance or where he came from; they just saw his heart. If humans could be a little more like animals, maybe the world would be a bit better!

Link copied!
Interesting Articles
Mammals
What Are the Differences Between Jaguars and Leopards?