The Characteristics, Behavior, and Habitat of the Meerkat

The color of the meerkat's fur changes according to geographic region. It can be lighter or darker, and its tone allow the animal to blend in better with its environment. 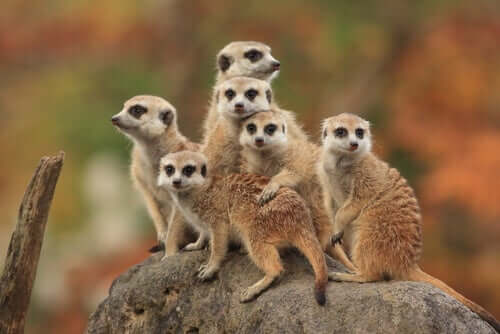 The meerkat, also known as the suricate, is a small mammal species that inhabits desert areas of Africa. The species gained international fame and popularity thanks to its famous role in the Disney movie The Lion King.

Characteristics of the meerkat

The meerkat (Suricata suricatta) is a carnivore that belongs to the Herpestidae, or mongoose, family. To be more specific, it’s one of the smallest mongooses, weighing between only 1.4 and 2.1 lb. It possesses a long, thick tail and short hair, which sets it apart from other mongooses.

The color of the meerkat’s fur changes according to geographic region. It can be lighter or darker, and its tone allows the animal to blend in better with its environment. All meerkats possess stripes and spots that are darker in color on its back and eyes–one of the principal characteristics of the species.

The suricate possesses strong nails that serve the purpose of breaking rocks and digging. What’s more, these animals have 36 very sharp teeth, which allow them to tear apart meat. Given these physical traits, as well as the species’ social nature, meerkats don’t make for good pets.

The behavior of the meerkat

This species is very sociable and, in nature, they tend to live in large socially structured groups of between 30 and 40 individuals. These colonies inhabit a network of very large tunnels that allow them to resist strong temperatures during the day and seek refuge during the night.

Meerkats, like other species such as the coyote, are expert sentries and there’s usually at least one member of the community on the lookout. When the meerkat responsible for being on watch spots a threat, usually a predator, it lets out a warning bark. That way, the rest of the group can hide.

Meerkats are also very good parents, as they are experts in taking care of their young. They are constantly looking over their offspring, and young meerkats are the first to be protected in the case of an attack. Another interesting fact about meerkats is that they share their burrows with other species of mongooses and squirrels, such as the yellow mongoose.

This mammal species is very intelligent. For example, they are capable of eating some of the most poisonous animals in the world, suck as scorpions, because they remove their stinger. They learn this behavior little by little and are able to teach it to their young.

What’s more, these animals have an enormously rich collection of vocalizations. They have noises that signify warning, panic, recruitment, and a few to give orders and indications to other meerkats. Experts have also proven that they have different calls for different predators, much like the green monkey does.

The habitat of the meerkat

These mammals inhabit the African continent, specifically in sandy desert regions. The meerkat is found especially in the Kalahari desert, located in Botswana, and also in the deserts that cover Namibia.

In Namibia, there’s a specific subspecies known as the desert meerkat, although the South African meerkat also exists in this region. At the same time, there’s a third subspecies, the Angolan meerkat, that exists in Angola.

There’s an abundance of meerkats in existence today, meaning the species isn’t in danger of extinction. The biggest threat to their well-being is being taken into captivity as pets. This is because the requirements of the species are very high and can’t be met in an apartment. In fact, despite what many people think, there’s no such thing as a domesticated meerkat, like there are ferrets.

Animals That Live in the Desert
Animals that live in the desert have a pretty tough existence, but they've adapted to the environment and its extreme conditions. Find out more! Read more »
Link copied!
Interesting Articles
Mammals
All About the Southern Right Whale Dolphin