Salamanders and Lizards: Everything About These Animals

As the most striking common feature of this animal, we should note that reptiles have the amazing ability to regenerate their amputated limbs. This is used when they are injured and fleeing from a predator. 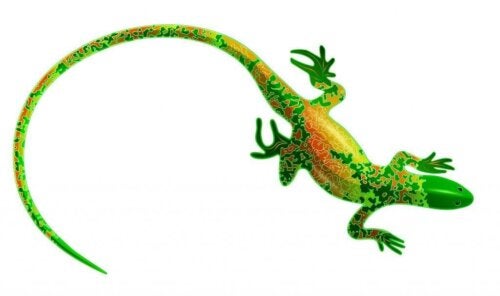 A closer look at lizards

Lizards are reptiles that belong to the family of Lacertidae. Chameleons and iguanas also belong to this family. However, lizards comprise the largest suborder of reptiles today.

Lizards have cylindrical bodies, covered by shiny, smooth scales and with conical heads. These animals also have eyes with mobile eyelids and ears with external openings.

In addition, lizards have dry skin, which is why they often avoid direct contact with water. However, they’re able to swim fairly easily when necessary, just like most reptiles.

A very typical characteristic of these reptiles is the ability to detach their tails. They use this technique to escape predators. However, the regrown limb will never be identical to the original. This ability is called autonomy. In fact, it’s possible due to the special rupture plans in the caudal vertebrae.

Getting to know salamanders better

Many people think that salamanders are also reptiles, just like lizards. However, these curious animals are amphibians. They belong to the order Caudata, which means “with tail.” According to specialists, there are more than 300 species of salamanders distributed in 10 different families.

Salamanders have long bodies with striking shades of black and yellow. This is aposematic discoloration (the use of color to warn potential predators).

These animals are very fast when capturing small insects for food. In addition, salamanders also have the regenerative capacity to regrow their amputated limbs.

However, unlike lizards, salamanders have soft, delicate skin, and they must maintain a certain level of moisture. These animals also usually attract attention for the bright colors of their skin, with the striking black and yellow shades.

Despite how visually appealing the animal is, you should know that this attractive animal has small venom glands that function as a natural defense against potential predators.

Differences between salamanders and lizards

As we’ve mentioned, salamanders and lizards are very different animals in their behavior and their appearance. To help you recognize the differences, we’ll summarize the main differences below:

Salamanders have long, slender bodies. Their tails and faces are rounded. However, their size varies by species. For example, China’s giant salamander is over six feet long, while others are no more than 8 inches.

A lizard’s skin is smooth and dry, formed by overlapping shiny scales. Some species have almost transparent skin. On the other hand, others may have bands or stripes on their bodies. Many also are uniform in color.

Alternatively, the salamanders’ skin is very moist and has characteristic black and yellow coloring. All species of salamanders secrete from their skin to keep it moist.

Diet and eating habits of salamanders and lizards

The vast majority of lizards are carnivorous and insectivorous. However, some also hunt mice and small lizards. There are also some rare species that maintain a herbivorous diet. They all also have small, wide, polished teeth.

Like lizards, salamanders are carnivorous; however, they maintain a more varied diet. These animals can consume frogs, fish, insects, and can even eat other salamanders.

Salamanders maintain nocturnal feeding habits and live near or in the water. In their natural habitat, they usually hide in caves or under wet leaves. They generally emerge just after sunset. In addition, these animals often attract attention because of the high speeds with which they catch their prey and feed.

Lizards are usually more active than salamanders during the day. However, they have certain nocturnal habits. Most species are terrestrial and avoid direct contact with water. Curiously, some species can live in trees.