Why Do Chameleons Change Color?

Chameleons change color not to disguise and hide from predators as many people believe. Here, we'll talk about the real reasons. 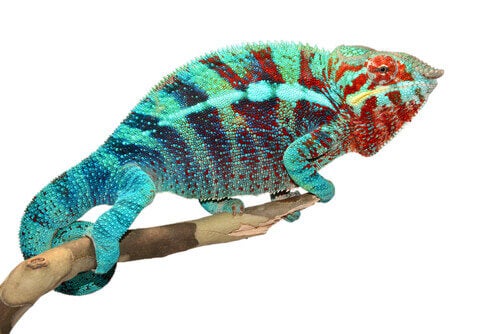 Animals that change color have always amazed humans. In most living things, the coloration is due to dead tissues, such as the exoskeleton, scales, feathers, and hair. It’s also relatively fixed. However, some species are capable of rapidly changing colors. This allows them to display different colors and patterns in response to changing environmental contexts. Let’s take a look at why chameleons change color.

As we mentioned before, some animals, such as cephalopods, fish, and reptiles have the ability to change their color during interactions with other organisms. Among them, chameleons (Chamaeleonidae family) represent an intriguing case. Unlike some animals that can change color in a localized area, chameleons can change the color of their bodies and change patterns during social interactions.

The first thing to be aware of is that chameleons are ectothermic animals. This means they’re not capable of generating their own internal heat by themselves. As a result, all ectothermic organisms depend on external heat sources to reach certain body temperatures.

It’s important to keep in mind that many of the traits of ectothermic animals change substantially depending on the individual’s body temperature. These traits include the speed of digestion, agility when running or swimming, and their coloring, among other traits.

Also, consider that dark colors absorb light and heat, while light colors reflect it. As a result, some color changes are easy to understand for anyone who has spent time in a black car in the bright sun on a summer day. Chameleons know this. In fact, they use their skin color almost as a thermostat to control the temperature they receive from the sun.

When a chameleon is cold, they deepen their skin to a darker shade, like pine green. When they want to cool off, they change to lighter shades like mint green.

Dress to impress: The strategy of why chameleons change color

The second reason chameleons change color is something that’s very familiar to humans: self-expression. For example, this is similar to when we change our outfits or hairstyles to adapt to our mood. Chameleons also change their colors according to their moods.

Normally, chameleons get darker when they are afraid. They also get lighter when they’re excited. Also, there’s a difference between males and females. Males change color more frequently than females, who tend to use more subtle signals to communicate.

Male chameleons change color to help them attract a mate. When they display bold tones, this sends a signal to females that they’re healthy specimens. On the other hand, darker tones in the presence of another male can show that they’re willing to fight. As a result, chameleons can alternate between several different looks each day, depending on the occasion.

The science behind changing colors

Previously, scientists believed that chameleons changed their color similarly to how octopuses and squids do. These animals alter their appearance using bags full of pigment in their skin cells called chromophores. However, scientists discovered that the chameleon’s color change is even more complex.

The chameleon’s skin has colors produced by pigments. These are colored compounds that are synthesized or accumulated in cells. As a result, there’s a range of colors that result from the presence of melanins, pterins, and other chemical pigments.

The upper layer of the chameleon’s skin is made up of cells that contain pigments. For example, if they’re yellow, they’re xanthophores. If they’re red, they’re erythrophores. These pigmented cells are mainly present in striped regions. Melanophores make up the deepest layer, which have extensions that reach the top layer of the skin.

On the other hand, the chameleon’s skin has another type of coloration, which is due to the presence of reflective nanostructures. These nanostructures are in specialized cells called iridophores. These are produced from the guanine content of the cell and produce iridescent metallic colors by interacting with light.

Examples of Animals that Use Camouflage
Many creatures try to hide in their environment to avoid or confuse their predators. There's a group of animals that use camouflage to hide while hunting. Read more »
Link copied!
Interesting Articles
Reptiles
Leatherback Sea Turtle Hatchlings: Why Do They Become Disoriented?