Home » Animals » Wild Animals » The Fascinating Life of a Hummingbird

The Fascinating Life of a Hummingbird

This tropical bird is known for its long beak. It feeds on flower nectar and flaps its wings at speeds that are unperceivable to the human eye. In winter, it migrates to warm areas, and returns home during the spring. 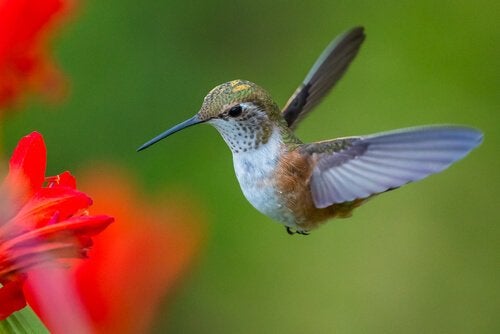 This tiny, vibrantly-colored bird usually appears in gardens where there are certain flowers to eat their nectar. It’s notable for its speed when flying — you can’t see its wings moving! In this article, you can learn about the fascinating life of a hummingbird, a very beautiful little bird.

Traits of the hummingbird

Also called “hummers”, because their wings beat at such a fast rate they hum, these birds use their long beaks to poke flowers. They are native to Central America, although they can also be found all over the continent. They prefer subtropical regions that are full of vegetation.

There are five different species of hummingbirds that are all similar in size. They are a maximum 25 cm long and weigh 11 grams. When it comes to their physical appearance, they have long beaks and striking plumage of several colors such as green or blue. They fly to speeds up to 90 flaps per second. These birds can fly in any direction–even backwards– and nectar is their basic food.

They also have a very high metabolism and can enter a “lethargic state” for several hours in order to conserve energy. Hummingbirds have no problem flying in strong winds, and they communicate by emitting a very characteristic chirp.

It’s one of the smallest birds on the planet, and it’s quite vulnerable during the first year of life. However, if it survives the first 12 months, it can live for four years without difficulty.

The hummingbird’s life consists of several stages, so let’s begin by talking about its birth. After mating, the couples separate, and the mothers are responsible for making the nests. They make them in the shape of a cup, using twigs and pieces of tree bark pieces, with a small hole in which they can fit half of their tiny bodies.

They can even build a sort of cushion out of cobwebs that they find in nearby, and also camouflage it with moss or plants. The nest is the size of a walnut: six centimeters high, and approximately four centimeters in diameter. It’s only for depositing and hatching eggs, not for sleeping.

Females lay up to three eggs per season, and they are the size of a coffee bean (they are the smallest in the world.) They incubate them for 18 to 19 days, only leaving them alone for a few minutes to eat, and then the chicks are born.

At that time, they depend entirely on their mothers. They don’t have feathers until the eighth day, and they don’t know how to eat on their own. That’s why their mother must leave the nest and look for small insects to regurgitate into her babies’ beaks.

After three weeks of intensive care, the offspring have the ability to fend for themselves and leave the nest. From then on, they are already considered to be adults. They’ll spend a lot of time eating! A hummingbird can consume a lot of nectar in one day, up to one-third of its body weight.

The hummingbird is a solitary animal, and only lives with a mate during the mating season, although it’s not necessarily the same bird as the previous season. Males make certain interesting movements with their wings — some are very amusing maneuvers — to attract females.

The wings make a humming sound when flap, and they also chirp louder than usual in order to make their presence known.

A female will choose a mate according to the movement a male makes in the air. If she accepts a mate, she will approach him, otherwise she will continue flying in search of a more attractive mate. Males tend to be fairly territorial with their own sex, and can mate with several females within the boundaries of their territory.

Finally, you should know that migration is an important part of a hummingbird’s life. In winter, they move to warmer areas, and in spring they return home to mate.