The Most Incredible Defense Mechanisms in the Animal Kingdom

Some animal species have very strange methods to defend themselves. In fact, in some cases, you'd think that they were more like what a human might do. 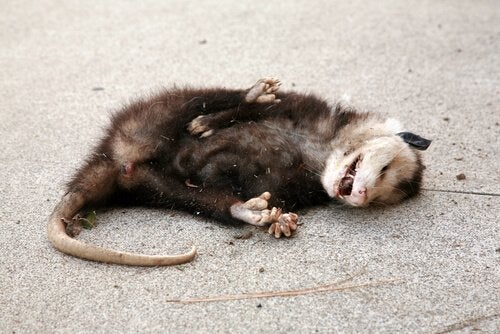 Some animals resort to quickly fleeing and others hide. There are some animals that blend in with their surroundings and others play dead. All the defense mechanisms in the animal kingdom are truly incredible. In this article, you can read about some of the most fascinating ones!

The Most Amazing Defence mechanisms in the Animal Kingdom

Without a doubt, “nature is wise” and has given each animal a special ability. For the animals that aren’t capable of attacking predators, their need to survive has caused them to develop some really surprising defense mechanisms.

The animal you see at the top of the page is the possum. Many people despise this marsupial maybe because it’s a bit ugly, gets into garbage cans, and gives off a quite awful stench.

However, there is no way anyone can’t deny the fact that these marsupials are quite clever. When this animal feels threatened, it plays dead! It throws itself onto the ground, opens its mouth, sticks its tongue out, and closes its eyes. A possum can remain still for a number minutes and even lower its heart and breathing rate.

Also known as the”porcupine of the sea”, the blowfish’s defense mechanism consists of inflating its entire body to look larger than it actually is. When it feels threatened, it blows up like a balloon and frightens potential predators.

But how does it do this? Basically, it expands its very elastic stomach and it swallows a large amount of water in a matter of seconds. The blowfish can multiply its size by many times and some species have even developed spines to look even more dangerous.

And that’s not all. It also emits a substance called tetrodotoxin, which can be lethal for other fish and even humans.

The majority of lizards that live in the American Continents and Spain have the ability to “let go of their tail” whenever they fell threatened. For example, if a predator catches them from behind, they detach themselves from their long tales as if it were a magic trick.

The most curious thing is that after a short period of time… it regrows a new one! This way it can use this trick serval times against predators. Of course, this isn’t the only trick they have. Many of them can camouflage themselves in their surroundings (mainly in forests or jungles).

Who would even consider attacking an animal that can set off 700V electric discharges within a few seconds? Not even the bravest human! The electric eel is one of the most dangerous fish in the on earth because of this defense mechanism.

The electric eel electrocutes its victims by using a group of special cells that are spread all over its body, which is over two meters in length. The voltage of its electric discharges can vary depending on the location of its body. This way it can also stun its prey. These amazing animals can maintain a discharge for up to an entire minute!

It doesn’t just make humans feel sick, the liquid can cause temporary blindness if it gets into its victim’s eyes.  A skunk may do this even if you don’t mean it any harm!