Due to the sounds they emit, these huge cetaceans are capable of communicating with family members from several miles away. 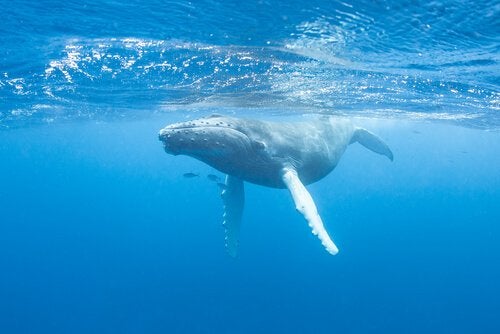 Animals use serval techniques to communicate with each other. Whale song is one of the most fascinating mechanisms found in nature. If you wish to find out more, then continue reading to learn all about this mysterious form of communication.

The world’s biggest animals emit a collection of sounds that are composed of repetitive and predictable patterns. One of the most “musical” species is the humpback because it can make sounds that are similar to the sound of humans singing.  Another well-known musician is the Greenland whale, which is able to create different sounds each and pass them on to future generations.

Cetaceans are creatures that are known for the “music” they use to communicate with each other underwater. These animals have poor vision so they use these “songs” to locate each other.

An interesting fact about whales is that they sing underwater and the sound faster than it does in the air. Sound travels at a speed of 500 meters per second underwater, whereas it travels at 340 meters per second on land. Their sounds also have to cover more distance. Whales can talk to their family members from several miles away!

Cetaceans have a more developed sense of hearing than most land animals. This allows them to detect the whereabouts of sounds with incredible precision.

Many researchers have focused on studying whale song. Many believe that they use it during sexual selection, though it also has other functions. For example, it helps them determine the size and type of any object they might encounter. In some whale species, only the males sing only when they are in heat. This is how they can “show off” to the females.

Two males can even use these sounds as a way to claim territory. They might be saying something like “I’m in charge here,” in order to keep other males away.

During courtship, humpback whales create a new, exclusive song that is not repeated by others whales. Whale song can also be used to alert other whales when one has found a school of fish, so they can all eat together in groups.  This is commonly referred to as the “feeding call.”

How do whales “sing”?

Whales sing differently from humans, who use their larynx and vocal chords to produce musical tones. Cetaceans‘ sound mechanism may develop in two different ways depending on whether the species is toothed or baleen.

For example, which it comes to blue whats, air passes through the “lip-like” structures that allow them to create two sounds at once. The vibration reverberates through the whale’s head. in the case for sperm whales, they can emit noise up to 223 decibels in volume.

As for baleen whales, such as the rorqual, grey whale, and bowhead whale, they don’t have these type of lips.  Instead, they do have a larynx. These animals also lack vocal chords, and they can’t exhale air precisely enough to produce a sound that way. Baleen whale song can reach around 180 decibels.

Fun fact: whales that live in similar geographic regions sing similarly as well, with only slight variations. On the other hand, when comparing the melodies of species from different hemispheres, they’re completely different.

Finally, it’s worth mentioning that (because of an increase in maritime traffic) whales are increasing the volume of their songs. They’re “making themselves heard” around the world, and aren’t remaining quiet like they did centuries past. These high-volume songs cause more stress and other difficulties, such as more complicated mating.