Home » Latest News » Help them out! » Animal abuse? » More Than 100 Dogs Rescued From an Illegal Breeder

More Than 100 Dogs Rescued From an Illegal Breeder

Compassionate animal lovers work wonders each day when they free dogs from breeders and puppy mills. 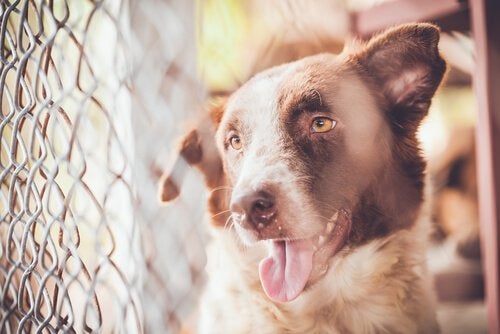 Animal abuse is becoming more and more widespread, whether it be committed by an individual or camouflaged by a business. This is the case of the news that we have to tell you today. It all happened in a Spanish town where there was an illegal breeder.

Illegal businesses hide to evade taxes, money that they do not seem to want to use for keeping their employees happy, and in this case, keeping their animals happy.

The animals’ conditions in the illegal breeding center

The animals that were in this breeding center destined to traffic puppies lived in deplorable conditions. For many years, there were around 114 dogs and 22 cats locked in cages that left them almost unable to move.

The hygienic conditions were conspicuous by their absence; many animals were not well-hydrated or well-fed.

Up to nine animals were enclosed in the cages, which did not have ventilation, just like the center. Since the tiny room where the animals’ cages were placed did not have outside light either, the walls were full of mold due to the humidity and lack of cleaning.

Furthermore, the cages were full of the animals’ urine and feces. This made the animals contract infections and be in poor health conditions.

A sad place in which many animals had the misfortune of ending up. They say that everything comes out into the open, for better or for worse. Was this hidden?

The illegal breeder is exposed

As much as it can be hidden, a place where commercial activities are done always creates movement. So the police did not take long in finding out about it; some neighbors had commented that something odd was happening in that place. At that moment, operation Shar Pei began.

Soon they started the investigation, and they discovered that the breeder did not have any type of permit for any class of commercial activity. This would not have been so serious if they had not had the animals under such poor circumstances and conditions.

However, once they found out that there were no permits, this gave the police the go-ahead to do a search of the place and discover the awful situation that the animals were in.

Most of the dogs that were in the center were delicate breeds; they needed specific attention that they were not receiving.

Of course, none of the evidence left room for doubts about what they had to do with this illegal breeding center: close it.

And that is exactly what they did. They shut it down immediately and filed a report about the managers of the establishment. They will have to respond to and pay for their acts.

What happened with the animals from this illegal breeder?

More than 100 animals that had been abused passively and possible actively had no place to go.

When they found out about the situation, all the protectors and associations in favor of animals got going and adopted these dogs and cats. They had the intention of treating the physical and psychological damages with the purpose of finding them a home.

These associations had to use social media to ask for funds that cover all these costs. They also called all of those who expressed desire in getting a pet. We hope that they are successful.

The laws concerning animal possession and animal abuse have been tightened in the past few months in Spain. This is not going to make it easy for these offenders who played with the lives of more than 100 animals.

According to the Spanish Civil Guard agents that worked on the case, “the sanctions that they face will be very high.” In addition, they will be strictly forbidden from possessing an animal ever again or from using them for any type of commercial activity.

The managers of the illegal breeding center were breaking the law by continuously abusing animals and being completely aware of what they were doing. The law will not look past that.