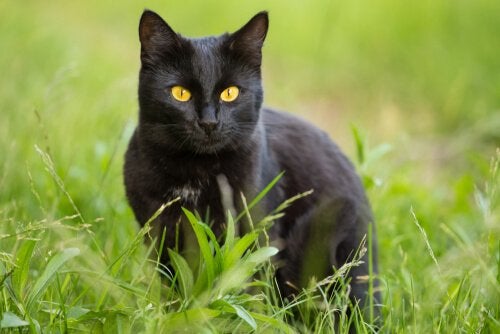 Known as the Bombay Cat, this feline was born in the United States and it’s the outcome of crossbreeding a Sable Burmese with a Black American Shorthair.

If you tried to count all the cat breeds that exist, it would be an almost impossible task. Many have already been mentioned in this website and the list still goes on. In today’s article, you can learn about the Bombay cat, a miniature panther that catches the hearts of many and hypnotizes others.

All about the Bombay cat

Since it’s called the Bombay cat, many people would think it’s from that city. However, it doesn’t come from Bombay. The first specimens came from the crossbreeding of a Sable Burmese and Black American Shorthair.

The breeding took place in Kentucky, USA, when a breeder was trying to make a special version of a black cat. In the 1950’s, a cat with pure black fur with hypnotizing bright eyes was born.

So, where does its name come from? It comes from its resemblance to the black panther that lives in India. This breed had no problem being recognized, because it was out of the ordinary at the time. The breeder intended to have a black Burmese cat, but a beautiful short-haired cat was born instead, with jet black fur and eyes similar to those of a panther.

It’s a medium-sized cat, with short hair and large almond-shaped eyes that are normally yellow or green. It’s also muscular and flexible, with harmonious, elegant lines. Its head is usually rounded and it has a wide face with a prominent forehead.

Its ears are rounded and a bit slanted forward, and its tail gets narrower towards the end. Also, unlike many cats, its paw pads are black like its fur. The only color allowed for it to be considered purebred is jet black, without any spots or any other colors.

The reputation of cats being independent creatures is broken when you consider this cat’s sociable nature. It doesn’t like being alone. It’s affectionate and calm, and it doesn’t like to get into fights. Also, it shows a lot of self-confidence.

Yes, if you’ve heard about cats being curious, this one takes the cake. That’s one of the most obvious aspects of this breed’s personality, along with intelligence. Teaching simple commands to this breed won’t be a problem, because it will unite its dexterity, intelligence, tranquility, and the great love it has for you.

They’re great for apartments, because they’re adaptable. They also adapt well to change, which is an advantage, because changing routines won’t bring a negative effect upon them psychologically.

They will always seek your love and approval.  So, if you’re looking for an independent cat that “does his thing”, while you do your own, then don’t choose a Bombay cat.

Due to its sociable nature, it’s the perfect family cat, especially if there are children or other cats. Interestingly, studies have demonstrated that this breed gets along better with dogs than other cats do, perhaps because its character is similar to that of dogs.

They even love to go out for walks as if they are dogs! Put a harness on your Bombay cat, and go on walks with him. Just be careful not to tire him out, because this breed is not very active, even though it’s very playful.

They aren’t good with loud noises, so try to keep them in quiet places. This is because their sense of hearing is very-developed. Therefore, any sound, no matter how imperceptible it may seem, sounds like thunder to them.

When it comes to taking care of them, they don’t need that much more attention than other cats. However, feeding them is an exception, because they have a special kind of anxiety and obsession with food that makes them indulge everything they find.

So, it’s a good idea to watch their diet and don’t leave food out for them all day long. Feed them on a schedule and make sure their food is good quality, low in fat, and high in nutrients. If you love cats, but you want one that’s affectionate and sociable, the Bombay cat might be perfect for you.