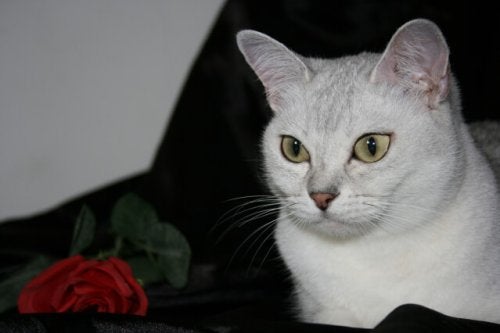 The cat is an animal that over time has been bred with different species of felines. Therefore, many breeds have emerged, many of which you may have never heard of. Some you may have seen, but you aren’t sure what they’re called. So, have you ever heard about the Burmilla Cats? Continue reading to find out all about this breed!

Burmilla cats — everything you need to know

This cat originates from the United Kingdom.  In 1981, the first cats of this new breed emerged from mixing a Burmese Lilac Cat with a Persian Chinchilla Cat. Hence the name “Burmilla”. When the first litter of these cats were born, the breeders couldn’t resist not promoting the species.

In order to make sure this species would survive, breeders began to run genetic tests in order to get the best kittens of each litter. Then they used them to make the perfect cat, which is the Burmilla cat you know today. However, this cat didn’t receive official recognition from the Feline International Federation until 1994.

Traits of the Burmilla cat

This is a medium sized, muscular cat with an elegant demeanor. It has a straight back and round chest. It has slender, long legs, which stand out for their strength.
The base of its tail is wide and covered with a lot of fur, and its becomes narrower as it gets close to its rounded tip. It also has one very interesting feature: it seems to have the letter “m” on its forehead. It has a triangular-shaped head, wider in the upper part and gets narrow towards the bottom.
The Burmilla cat’s eyes are large and almond-shaped, with a black outline that stands out greatly against his green irises that don’t change color.
This cat has two fur variations: one with short hair and another with long hair. The one with short hair has a lot of it closely attached to his body, while the long haired one does not have a “double coat”. Fur colors are: blue, black, chocolate, lilac, red or cream. Its fur will always be very bright, soft, and irresistible to pet.

Personality of the Burmilla cat

This cat stands out for being very playful, and for being capable of adapting to any environment, person or pet. They are social creatures that love being surrounded by people or animals and playing games.
Its personality is sweet, affectionate and loving. It’s always wants to be petted, and will always respond to your need to pet him. This cat will always welcome petting, games, and hugs.
Burmilla cats aren’t aggressive and, if there is something that stands out about them, it’s their intelligence and energy level. The Burmilla cat is different from other cat breeds because they don’t spend twelve hours sleeping like other felines. Instead, they want to stay active all the time. This cat will show his intelligence by wanting to communicate with you or other family members.

Special care for the Burmilla Cat

This cat doesn’t easily get sick and it has no known genetic or age-related diseases. It will only need a good and nutritious diet and some exercise.

As for its fur, you should brush it several times a week to remove dead hairs and keep the coat shining for a long time. You have to check its ears and clean them often to avoid possible infections such as otitis, which is very common in cats.
The Burmilla cat, as you can see, is a different kind of cat. It’s not so independent, and it’s excessively affectionate. It has all the advantages of a cat and a dog at the same time. What more can you ask for in a pet? Are you already thinking of getting one to become your new companion?
Image sources: Sheila Bormann, Armin Tafertshofer y John Turner.
Link copied!
Interesting Articles
Cats
What's the Origin of the Persian Cat?