In addition to using certain types of sounds to communicate, felines also show their intentions and how they feel by using different body parts. Feline body language consists of using their tail, ears, eyes, and whiskers as a way to express themselves. 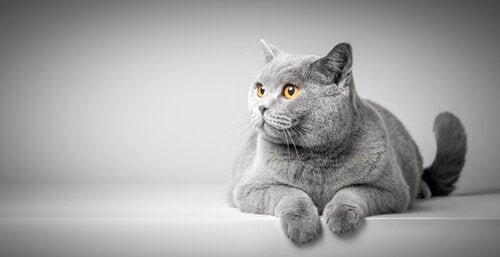 People often say that cats aren’t very expressive and that they’re better at hiding their feelings, even if they’re sick. However, if you like these animals and pay good attention to them, you’ll quickly learn to interpret them better. Today, you can read this article to learn about cat body language.

Catus felis use several tools to communicate with their peers and other members of the animal kingdom, including humans. Among these sounds are meows, purrs, and hisses.

However, cat body language consists of using use different body parts to express themselves. For example:

On the other hand, body posture also conveys information in certain situations. Cats will arch their backs and have their hair stand up if they feel like they’re in danger. In this situation, they may attack or flee.

However, if they put expose their belly, they’re showing you that they trust you, even though they don’t always like to be pet by humans.

In addition to their meows, purrs and other sounds, cats use body language so attentive humans can interpret what they’re trying to say.

Tails say a lot about cats

Catus felis also express themselves by using their ears, whiskers and eyes. For example:

On the other hand, during a conflict with another animal, they’ll raise their heads if they feel confident and lower it if they’re aggressive, submissive or scared.

As if that weren’t enough — and by putting the idea of feline indifference on the side — what cat lovers haven’t come home to give their cat a bunch of affection?

There are kittens who run toward their owners with their tails raised while welcoming them with meows. They rub against their legs, nudge them with their heads or gently nibble on their human.

This display of affection for their owners doesn’t fit their reserved and non-expressive reputation. What do you think? We have to learn how to interpret their different messages. They’ll use several body parts and sound signals to express themselves.

Maybe cats, due to their intuitive ability and great intelligence, distant themselves from those they know don’t love them or don’t pay attention to them. They practically don’t waste their time on people who are non-accepting of them.