Home » Breeds » Cats » Cat Phobia: What It Is and How to Overcome It

Cat Phobia: What It Is and How to Overcome It

A cat phobia can severely affect your life as these animals are most likely present everywhere in your daily life and are parts of your friend's homes. Through some effort and sometimes with professional help, it's possible for you to overcome this problem. 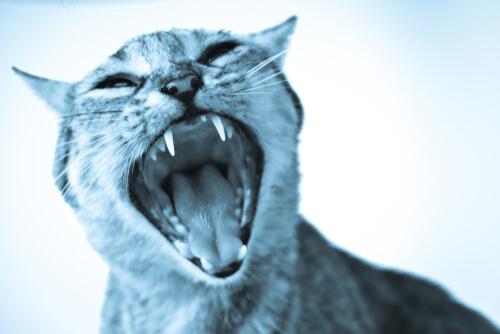 Even though cats are nice and friendly animals to most people, there are those who consider them a huge threat to their well-being. If being near a feline triggers panic, then you may be one of those people who is afflicted by cat phobia.

The name of this condition is Ailurophobia and it basically describes someone with an extreme fear of being in contact with cats. However, like any phobia, this is an irrational fear because, well, most cats are harmless. So the terror you feel is greater than the damage a cat can cause you. (Unless you run into a wild one at the jungle.)

Commonly this is a problem that derives from previous bad experiences with cats. There are also many cases that have to do with a fear transmitted by another person. Most of the time a cat phobia is acquired during childhood. And, although almost nobody is aware of this trauma, it’s still an imbalance that you can overcome.

It’s not very common, but perhaps a feline bit or scratched you when you were a child. Or maybe you had another bad experience which was somehow associated with cats. In any case, fear is a healthy signal that we humans activate in order to protect ourselves.

Cat phobia could also be associated with negative superstitions. For some people, cats have negative connotations such as bad luck. Likewise, diabolical or supernatural powers are often attributed to them in the folklore of some cultures.

Also, there are many evil cats on the big screens. In addition to that, there’s the myth that cats have seven lives and, because of that, they’re magical beings. In any case, these cultural representations have created many legends around this species.

Many people believe that this phobia arises out of ignorance. Because like dogs, cats are harmless pets and can live with just about anyone without conflicts. Felines are very playful, affectionate, and friendly with both children and adults. They are also great at chasing rodents (or is this another myth?).

There are some characteristic symptoms of ailurophobia or cat phobia. They mainly show themselves physically and correspond to a psychological imbalance. This doesn’t mean it’s a mental disorder, just that the body and the mind express rejection through fear.

Anyone with this type of phobia experiences anxiety, nervousness, and even panic when confronted with a cat. They begin to sweat and become agitated and can also experience shortness of breath and nausea. Hives and other associated ailments sometimes appear as well.

People with cat phobia say that they become paralyzed. Their symptoms appear even when they’re merely thinking of or observing images or videos of felines. In the same manner, they feel fear when passing through places where there are cats. They also refuse to visit relatives and friends who have them.

Most of the people who suffer from this condition know their fear is highly disproportionate. However, they can’t control how they feel.

How to try to overcome this problem

The first thing you should do is have an open and positive attitude. That is, look critically at the negative ideas and beliefs you have about cats. Also, try to identify the source of your fear. Go ahead and make a list of all of the possible causes.

Once you’ve identified the root of your cat phobia, it’ll be easier to face it. Avoiding cats is nearly impossible and is not a good solution. There’s no other way to overcome a cat phobia than confronting it in the real world. Don’t be alarmed, because, as in any process, you must go at your own pace.

Begin by reading about and looking at pictures of cats. Then try to approach some of them or just observe them from afar. Make a daily or weekly routine in which, little by little, you’ll have more contact with some cats.

Also, when you’re near these animals, try to control your breathing, keep it slow and well-paced. Take the power away from your fear; you’re in charge. Just remember that nothing bad will happen to you.

Other alternatives to overcome your fear of cats

In the beginning, you could help yourself via meditation and relaxation techniques. They’re effective tools to reduce your fear. However, if you think it’s impossible for you to move forward, then it might be best to consult a therapist.

Fortunately, there are a great variety of treatments and therapeutic methods out there to help overcome cat phobia. But, your attitude will play an important role in this process. You must have the disposition to do so, as well as perseverance and the conviction to go all the way with it.

You’ll soon notice favorable results and, why not, perhaps you’ll even join the world’s cat mania cult. If not, at the very least you’ll gradually learn to live in a world full of these animals. It requires a lot of tolerance and patience. But you’ll eventually manage your fear to lead a freer, less limiting life. 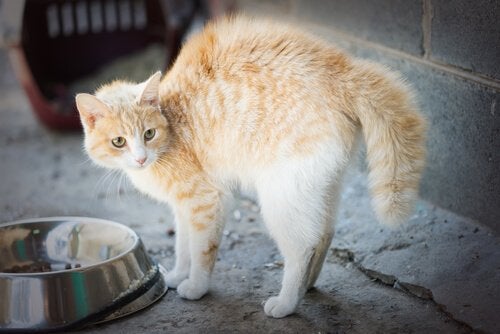 5 Causes of Phobias in Cats
Cat owners know how sensitive these animals can be to changes in their daily routines. Today, we'll tell you the main causes of some phobias in cats.  Read more »