Cat's Meow: everything to know about it

A cat's meow, which can include between 60 and 70 different sounds that are used to get them what they want from their owners. They able to communicate with their owners due to their great intelligence and sensitivity. 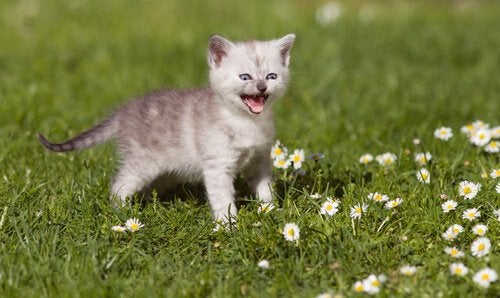 Cats are very intelligent beings and they know how to make themselves understood among their peers, other animals and, most importantly, with their humans. Today you can learn everything about a cat’s meow, which is one of the many communication tools they have.

To understand what they want, or something that has happened to them, owners should pay attention to their cat’s body language, facial expressions, and the sounds they emit. This is how you can tell if your kitten is angry, afraid, or comfortable.

The Royal Spanish Academy refers to meows as “the voice of cats,” which sounds like a poor definition. Instead, it’s a form of expression that emits different variants according to the speaker and what they want to express.

It’s also one of the many sounds made by the Felis Catus. A cat’s meow can also consist of hissing, purring, snorting, grunting, and even an expression that’s similar to crying.

On the other hand, those who know their cats well, know that each cat has their own personality. All cats are known for being different, and this is also evident in the way they meow.

Language that adapts to circumstances

Contrary to what many people believe, meowing isn’t a form of communication that cats only use with people. They also use it with other cats and other members of the animal kingdom.

However, ethologists claim that these adorable pets know how to manipulate their humans through meowing. Cats are able to choose the proper “meow” to use in order to get what they want from the people they share their home with.

The truth is that, due to the intelligence and sensitivity of cats, they can soon learn how to make themselves understood by their animal and human family members. When they meow, they do it in a different tone, volume, intensity or duration, according to the situation they are facing.

It’s estimated that kittens can emit between 60 and 70 different meows. Through them, they express emotions, feelings, needs, and desires. Cats meow for the following reasons:

Meowing among other cats

Aside from its relationship with humans, cats also meow when:

More details on a cat’s meow

While it’s normal for some cats to meow more than others, you may notice your cat has a strange, unique sound. If this happens, you should find out why and try to fix the problem. If necessary, you should try scheduling an appointment with the vet.

Some other reasons why cats express themselves vocally: