Home » Breeds » Cats » Do Cats Dream? Learn About the Sleep Stages of Cats

Do Cats Dream? Learn About the Sleep Stages of Cats

Just about everyone knows cats are "lazy" and spend many hours of their daysheir asleep, especially in winter when it's colder outside. But the question is how much, do cats sleep? 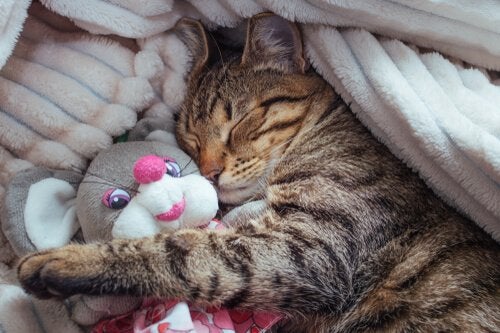 Cats, our beloved furry little friends, have a very well-known reputation for being lazy. In fact, most cats enjoy sleeping and naps so much that they sleep between 14 and 20 hours a day. They don’t just sleep for pleasure, either. Their bodies also need lots of sleep to stay in good health. But what exactly are the sleep stages of cats? Are they the same as ours?

It’s not enough to understand that cats like to relax, and that they sleep many hours a day. We still have a lot of unanswered questions about cats and sleep. Do they dream? What are their sleep stages like? Do they go into a deep sleep like we do?

If you want to know the answers to any or all of these questions about the sleep stages of cats, then keep on reading. You’ll learn more about your dear house pet!

The sleep stages of cats

Like with humans, cats sleep in various stages. There is a big difference, though. Cats have two main sleep stages: REM and non-REM, with some variations within each of these two main stages.

The REM phase is when you’ll see your cat’s eyes moving around quickly under its eyelids. It’s a lighter stage of sleep. In the non-REM phase, their bodies enter into a deep state of sleep that leads to a major decrease in brain and nerve activity.

Cats can spend up to 75% of their lives sleeping, and about 60% of that time will be in the REM phase. The other 40% happens during the “deep sleep” stage (non-REM). This is when cats are in the deepest parts of their naps.

Still, those percentages can change a lot depending on your cat’s body, age, routine, and environment. For example, older cats tend to spend much less time in stages of deep sleep. They can go as low as 25% in some cases.

The REM and non-REM sleep stages of cats

The REM phase of sleep brings cats’ physical activity levels way down. Once they fall into this stage, their brains “command” their larger muscles (the ones that allow them to move their legs) to rest and relax.

But that command doesn’t always stay in place during the entire time a cat is asleep. You can probably think of a time your cat has shifted around, kicked the air, or even spun around while it’s asleep. This can happen whether the cat is sleeping at night, or during the day.

A cat’s brain activity doesn’t drop much during the REM phase. This means it can stay more alert to its environment. The moment it perceives a sudden, or unexpected stimuli, it can react extremely quickly in case it needs to defend itself or run away.

On average, human beings take about 90 minutes to enter into that stage of sleep. Cats, on the other hand, can reach REM in just 25-30 minutes.Their bodies and brains also have a much easier time moving between the different stages of sleep than ours do.

When a cat goes into a non-REM stage, it’s unlikely it will move very much, if at all. This is a truly deep sleep: it’s knocked out. But because this kind of sleep also makes it much more vulnerable, cats try to find safe, out-of-reach places that give them a chance to “switch off” for a bit.

So, do cats dream?

Many cat owners find themselves wondering if their little friends can dream, especially when they see them moving around or making noises in their sleep. The simple answer is yes, cats can dream. It also looks like their brain activity while they’re dreaming is very similar to ours.

Most of their dreams take place when they’re in the REM phase, when they have higher levels of brain activity. Still, cats can also dream during their deep sleep phase, contrary to what we thought just a few years ago.

While they’re in that lighter, REM phase of sleep, cats’ dreams are generally about what happened during their day. It’s a kind of summary of their daily routine. This means that they often have similar reactions to when they’re awake, and exposed to certain stimuli.

However, once they enter deep sleep, their dreams become much more complex, and much less objective, or realistic. This happens because their bodies need a sharp decrease in brain activity to save energy, stabilize their metabolism, and replenish their immune system.

There’s still a lot left to learn about how cats dream during these non-REM stages of sleep. It’s impossible for us to get an exact idea of what they dream about during their deep sleep, but the current theory is that their deep sleep dreams are longer and can involve memories from things that happened weeks, months, and even years before. 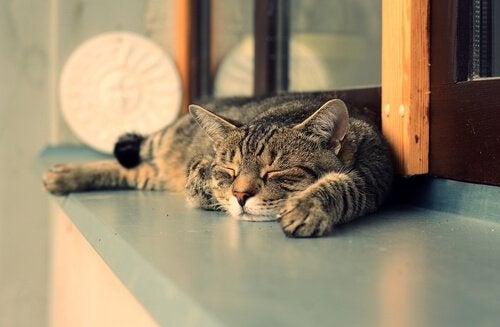 7 Reasons Cats Sleep More During the Day Than at Night
If you've ever wondered why cats sleep so much more during the day than they do at night, then read this article. We have the answers you're looking for! Read more »
Interesting Articles