Any cat owner will tell you that our feline friends are very independent animals. In this article, we'll tell you all about it. 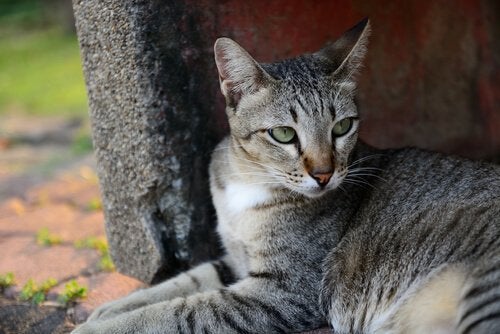 Any cat owner will tell you that our feline friends are very independent animals. They are solitary creatures, and practically self-sufficient, often relying very little on their humans for food and protection. While they might be far less wild than they might once have been, and have grown accustomed to certain home comforts, their feline instincts can take over when you least expect it.

Why are cats such independent animals?

While they might be domestic (and occasionally even sociable) creatures, cats continue to lead fairly autonomous lifestyles, separate from the people they live with. According to a study led by the University of Lincoln’s School of Life Sciences (in the UK), cats don’t need people to feel safe (unlike dogs).

While cats do enjoy interacting with their owners, they don’t depend entirely on them for a sense of protection. This streak of independence is highly characteristic of felines in general. Take for example tigers or lions, which often hunt alone in the wild.

Daniel Mills, who led the investigation, explained that they wanted to explore several aspects, including behavior, signs of separation anxiety, and the quantity and quality of contact they look for from their owners.

The results suggest that, while they are often more vocal and expressive with their owners than with strangers, cats don’t really show any signs of distress when an owner or family member leaves. Cats also show very little signs of attachment to the people that surround them.

The domestic cat has recently passed the dog as the most popular pet in Europe. This is because our modern lifestyles mean that many people now spend long hours outside the house. Because you don’t have to worry about walking them or feeding them twice a day (most cats are perfectly able to ration their food themselves) they are the perfect pets for young couples or those who live alone.

Cats’ independence is one of the greatest benefits for people looking for a pet that will fit in with their busy schedules. This trait isn’t always appreciated by dog lovers, who see cats as shy, cold, or distant.

The truth is that cats are simply independent animals. They don’t need us in the same way that dogs do, and can pretty much take care of themselves (especially if you install a cat flap so that they can come and go as they please).

This behavior isn’t an indication of a lack of affection or loyalty. They simply show their feelings less often and less extravagantly than their canine counterparts.

Because they don’t need constant protection and reassurance from people, cats are far more relaxed about being left alone. They can happily deal with all kinds of situations, and develop a more tight-knit circle of friendship, giving fewer individuals their complete trust.

When they find themselves in an unfamiliar place, they don’t trust anyone (not even their owners). This is because their innate instinct as a solitary hunter takes over. As a result, when you take them to the vet, on vacation, or move house, you might find they act strangely.

Why adopt an independent feline?

There are many reasons to adopt a cat. Here, you’ll find some of the main benefits. Keep them in mind if you’re thinking about getting a cat.

Advice on How to Socialize a Cat
Cats have a reputation for be ill-tempered animals. That's why a lot of people think it's difficult to socialize a cat. We'll give you some tips to help.  Read more »
Link copied!
Interesting Articles
Cats
What's the Origin of the Persian Cat?