Home » Breeds » Cats » How Old Is Your Cat in Human Years?

How Old Is Your Cat in Human Years? 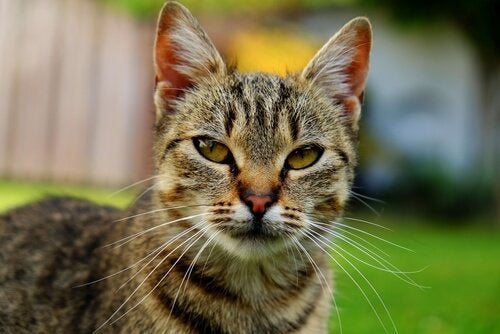 They say that one year of a dog’s life is equal to seven human years. By using this formula, you are able to calculate what stage of life a dog is at. However, it’s not so often to hear about the method of calculating a cat’s age in human years.  You can find out how to do it below.
Apparently, the same 7×1 rule applies to cats. However, according to experts, cats’ life spans have increased in recent years. Therefore, this equivalence is not accurate anymore.

How Long is a Cat’s Life Span?

Answering these questions, are not only meant to satisfy your curiosity. In addition, it will help you understand your cat better, so you can exactly meet their needs.

According to Cornell University in the USA, cats today are more long-lived than they were a couple decades ago. Normally, cats had a relatively short life that didn’t make it to the age of 6, which is equivalent to 42 human years. However, the average feline life span has increased due to the modern care, nutrition and veterinary attention.

Normally, a cat is considered elderly when it is 12 years old. However, many cats suffer from age-related issues of between the ages of 7 and 12. Therefore, no two cats are alike and we can not say that all cats die at the same age.

According to the Journal of Animal Research, although the feline life span already ranges between 16 and 21 years, veterinary advances have made it possible to cross that barrier. What a huge achievement! In fact, some are even known to reach 30 years. This is well above what the equivalent human age would be.

How to Calculate a Cat’s Age in Human Years

Since the life expectancy of cats is increasing, this implies that the one year to seven human years rule isn’t that accurate as it was several years ago. For example, according to the formula a two-year-old feline might very well resemble a 21-year-old instead of a 14-year-old.

Therefore, it is believed that one cat year is similar to four human years. So, the best way to calculate your cat’s age in human years would be substituting the first two years for 21 human years. Then, add up the multiplied cat years, subtracted by 2 times 4.

However, if numbers are not really your thing, there are several different online feline age converters that make it much easier.

Do Cats Live Longer than Dogs?

Although many people have believed that both pets have a somewhat similar life expectancy, it turns out this has become even less true during recent years. The average age of a dog is around 10-12 years. However, in some exceptional cases cats can even be reach 30 years old.

So what are the reasons behind these differences? It’s not so certain but cats’ hygiene and calm lifestyle do play a role. Knowing your pet’s age in human years will help you provide the attention he needs and take better care of him.

We know that pet’s lives are different than humans. However, age affects everyone, and knowing how and when to act is a necessary and price-less source of help. However, as mentioned before, each animal lives in his own little world, so you will have to monitors your cat to determine what’s going on in his life.