Khao Manee, the Cat Breed with One Eye of Each Color

This white-furred feline is always looking for a human companion -- it should never be alone -- and it loves to be pampered, played, and to be around children 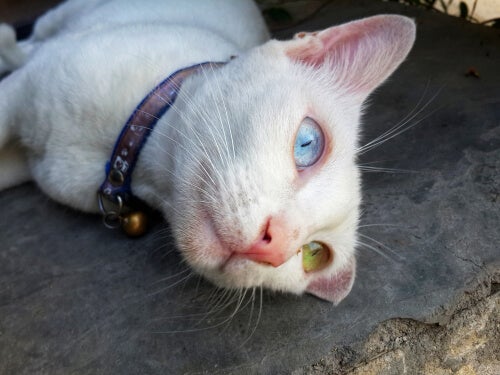 It’s hard not to notice the Khao Manee cat. It’s a beautiful cat with white fur and an attractive appearance due to their mismatched eyes — one being blue while the other is green or yellow. This cat breed is originally from Thailand, and it’s not very well known in the West. Below, you can find out about this mischievous and intelligent cat that adores humans.

Its name means white gem, but it’s also known as diamond eyes, white jewel or the royal Siam cat. All of these names indicate that this beautiful cat is one of the favorites of the royal Thai palaces.

It was believed that these animals bring good fortune and happiness. There are references to their existence in the Tamra Maew, a collection of poems about cats dating back to the 1350s.

While other breeds from this part of the world — like the Siamese, Burmese, and Korat– have already made it overseas. However, the Khao Manee didn’t make it to the United States until 1999. So, this cat just recently began to be known in the western world.

Take a look at the Khao Manee, the royal jewel from Thailand that has bright fur and shiny eyes. This cat breed is affectionate and intelligent. However, they stand out more than all other cat breeds due to their one blue eye and the other that’s green or yellow.

The physical appearance of Khao Manee

While the Khao Manee ideally have one eye that’s blue and the other that’s yellow or green, there are some whose eyes are the same color. However, this doesn’t take their uniqueness and beauty away because their eyes are also oval-shaped and somewhat oblique.

Some other traits of these beautiful cats are:

A cat that meows and that is attached to its owner

The Khao Manee are excellent meowers. If they need anything, they’ll be sure to let their owners know. So, if you are thinking about getting this type of cat, be sure to keep their meowing in mind.

If you love silence, don’t get a cat with this trait. It’s not worth the regret later. Please, keep in mind that these cats are expensive.

They are extroverted, friendly and very docile, and they seek constant attention from humans. They love to be pampered, play games, especially children. Also, of course, they can’t be alone. This is another thing to keep in mind if you are considering about bringing a Khao Manee into your life.

Taking care of this breed

While there is a relationship between white fur, blue eyes and deafness, not all cats with these traits have this problem. However, some of the Khao Manee are deaf. The good news, though, is that this problem is decreasing among new litters of kittens.

No matter what, you should have the vet check if your pet has any degree of deafness. If so, they will tell you how to handle this condition.

As for the rest, stay up-to-date with his vaccinations and deworming schedule. Feed him good quality food and, according to his needs, and brush him a couple of times a week. That way, your white gem will shine in all its splendor.