Maine Coon Cat: Traits and Caring For Them

Despite their large size, the Main Coon Cat -- known as the "gentle giant"-- has a calm personality and likes to be around people 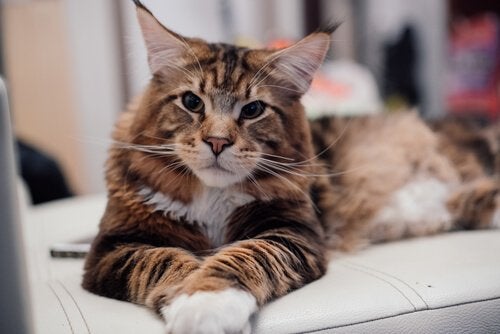 The Maine Coon Cat is an eye-catching breed because they’re large, strong looking and have an extremely beautiful coat. Read this article to learn all about the traits of this breed.

To tell the truth, the origin of this breed is unknown. They’re known to have been created in North America, but no one really knows when or why they came from this continent. Some people say they’re related to the Norwegian Forest cats that came by boat with the Vikings. Others say that they came from a pair of Turkish Angora cats in the 19th century.

However, this breed did originate from Maine, United States. For a while, it was a rural cat that was very spread out throughout that zone. In the 80s they became a popular breed. They were exported to other countries as a pet and the FIFE recognized them as their own breed in 1982.

Maine Coon Cats are affectionately called “the gentle giant,” because they’re one of the largest domestic cat breeds that exist. Males are a little larger than females. They weigh between 7 and 10 kilograms, while females can weigh 5 to 7 kilos.

This race isn’t just defined by its size. Their head is square and they gave prominent and striking cheekbones. They have pointy ears that are broad at the base and have a tuft of hair on the tips. Their eyes are large and slightly oblique.

The Maine Coon Cats’ hair is medium length and can come in a variety of different colors such as solid brown, two-color…except in lilac and chocolate. The hair is longer and denser on the inside part of their legs, chest, and belly. Also, their tails are wide and very hairy.

Despite their impressive features, Maine Coon Cats are calm and affectionate animals. However, they’re still cats, and just like most cats, they will choose a favorite person in the house with whom they’ll be more attentive and dependent on.

They’re not particularly active animals. They don’t need extra exercise, but they enjoy being in the yard and being able to explore and chase small prey. Those that are house cats like to spend their time sleeping and playing with their family.

Maine Coon Cats don’t stop talking. In addition to their body language, they’re very vocal animals that don’t stop making noises, meows and chirps, both among themselves and with humans. This doesn’t mean that they’re noisy animals, but they know how to get your attention when they want it. They’re also intelligent and clever animals. So when they need something, they’ll know how to get it.

This cat breed is a generally healthy breed that doesn’t have any hereditary health problems. However, due to their size, they’re prone to hip dysplasia, a problem that’s more common in dogs than in cats.

Most of the care for Maine Coon Cats has to do with their fur because it’s long and strong and doesn’t usually get tangled. However, it requires frequent brushing to help get rid of the dead hairs. Especially during shedding season because they could get hairballs lodged in their stomach.

Veterinary studies say that most domestic cats suffer from obesity. The Maine Coon Cat — a large and calm animal — is also prone to excessive weight gain. So, you should take your Maine Coon Cat for frequent veterinary check-ups and you should follow the dietary guidelines the vet gives you.

The Maine coon cat has gained popularity in recent decades due to their beauty. Their impressive square head and dense coat make them a unique cat breed. Plus, they have the perfect personality for a family setting.