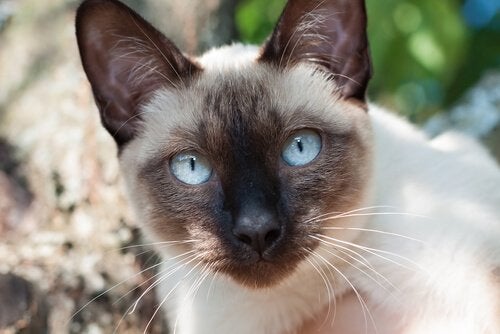 Siamese cats are without a doubt one of the most beautiful breeds due to their slender, light-colored body and blue eyes. Besides being elegant, they are both calm and curious. Continue reading if you would like to know more about these cats.

There are two varieties of Siamese cats. The first is the “traditional” or “Thai” variety, which is supposedly the original. It’s origin goes back from Ancient Siam (today Thailand), where these cats were exclusive pets for the king and his family. They believed that these animals had a pure character due to their white coloring, which was sacred in the region.

In Thailand, Siamese cats are known as Wichien-Maat, and it’s believed that they first appeared during the fourth century. Since they were considered to be very important and sacred, when a high-ranking person passed away, a Siamese cat was placed near the body in order to receive the spirit. Afterwards, the cat was considered to be the guardian of the deceased. They lived in a luxurious temple or monastery.

Some traits of the traditional Siamese cats are: round body and face, short nose, wide light or dark blue eyes, and a short tail with a round tip.

As for the modern variety, it dates back from around 1890. A decade earlier, the cats had been taken from Siam to England and the United States. They had contact with other feline breeds. This variety is stylish and slim, with a thin nose, almond-shaped eyes, long and lean neck.  They have light-colored fur with darker coloring on the ears, face, paws, and tail.

An ancient legend says that the Siamese cat were brought to this world when a monkey and a lion fell in love. The babies that were born from this impossible union had qualities from both animals. This story is a perfect example to explain the Siamese cat’s character: brave like a lion and agile like a monkey.

Just like most felines, they are extremely independent beings. As for Siamese cats, they may be loyal to their owners, but they will never completely be submissive. They may even show their kindness or dislike by meowing.

These cats are fairly affectionate (they often show love), and they feel very connected to their owners. They can be very sociable and especially curious, which is their main quality. Even if curiosity is normal in cats, it’s even more common in Siamese cats. They continuously inspecting their territory, analyzing new objects or looking for things that grabs their attention.

At the same time, they are very agile due to their physique and muscles. Siamese cats’ hyperactivity and energy are similar to other Asian breeds. They may spend hours running and jumping around the entire house. They are overly playful and happy.

Likewise, they are very sociable, intelligent, and lively. But be careful, they are also sensitive and sweet cats that purr often and select one person as their true owner (you’ll find out who it is by seeing who they want to cuddle with and receive attention from.

If you are thinking of adopting a Siamese cat, remember you shouldn’t bring him home until he is three months old.  Before that age, he would not have had the chance to socialize or learn anything form his mother. Therefore, he may not adapt to his new home.

Males are bigger and spontaneous, and females are quieter and more well-behaved. You should also know that it’s a very fertile breed, so during mating season, the meowing is unbearable. Many owners choose to sterilize the animal after the first litter.

Siamese cats may also be cross-eyed. Regarding their positive features, they have short hair, which means they are naturally clean and don’t require much grooming.