The Cymric Cat: long-haired and tailless

The Cymric cat originates from Manx breed cats, which were sometimes born with long hair. However, a spontaneous genetic mutation caused them to be born with very short tails, or with no tail at all. Breeders crossed cats with those traits in order to give birth to a new breed. 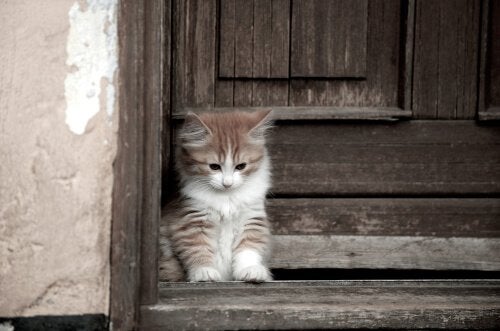 A long-haired Manx cat is a Cymric cat. What does that mean? It’s a cat with a small tail or no tail at all and it looks cute as a fluffy ball.

A Longhaired Version of a Manx Cat

This breed was developed during the 60s in Canada and the USA. Manx kittens that were born with long hair in some litters were selected to make this breed.

These animals lacking a tail is due to a spontaneous genetic mutation. The breeders– Leslie Falteisek, from the United States, and Blair Wright, from Canada– were responsible for this trait.

Remember that Manx cats–with no tails and short hair– come from the Isle of Man, located between England and Ireland. As for the name Cymric, it derives from the word for Welsh in the Celtic language.

Meet the Cymric cat, a friendly, intelligent cat that stands out becuase they totally (or partially) lack a tail, and they have a long, double-layered fur coat.

Other Physical Traits of the Cymric Cat

In addition to the total or partial lack of a tail and having long hair, Cymric cats have the following traits:

When it comes to the tail, there are three kinds of Cymric cats. The Rumpy has no tail at all, just an indentation on its rear. The Stumpy, on the other hand, has only a few vertebrae of a tail. However, the Longy has a tail that is a bit shorter than that of a common cat. Nevertheless, some cats are born with whole tails.

They’re a social, friendly cat breed that is very good with all family members and even strangers. Also, they have any problems with other pets, and you’ll appreciate the fact that they don’t meow a lot.

This cat breed is very affectionate, kind, and calm, and they love to play with their owners. These cats do have the tendency of being very dependent on humans.  They sometimes even follow their loved ones around the house, as if they were a dog.

The Cymric cat is an intelligent, curious cat that loves to run, jump, and have fun. So, they will be happy if you have a backyard or patio that’s set up to prevent them from escaping.

Caring for a Cymric Cat

Like the Manx, this cat is usually very healthy. It has a life expectancy of 10 to 15 years. However, the absence of a tail can cause spina bifida, a congenital disorder that prevents the spinal cord vertebrae from closing, which in turn causes several problems.

When it comes to the special care this breed needs, you should brush their fur at least once a week to keep it in good condition.

Also, since they usually shed a lot of hair, pay close attention to any formations of trichobezoars (hairballs) in their digestive systems. In such cases, a vet can tell you how to prevent and treat this problem.

A professional can also indicate the most appropriate diet for each stage of the cat’s life, and the vaccination and deworming schedule you should follow.