The Havana Brown Cat: brown like tobacco and coffee

Although its name might show that it originates from Cuba, this feline is actually a "mix" of several breeds. It loves to play and be petted, and it won't hesitate to beg for the attention it needs. 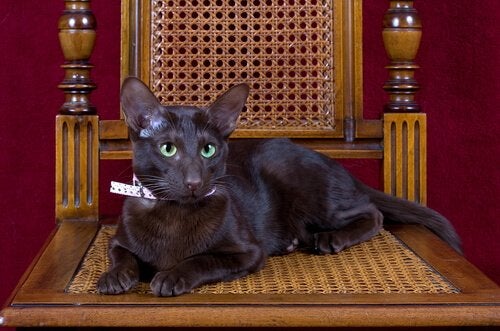 Elegance, green eyes, and short, smooth, reddish-brown fur are the hallmarks of the Havana Brown cat. But that’s not all because they are smart, loving, gentle cats that enjoy playing with their human family member.

A Caribbean Name of English Origin

The breed’s name can be misleading, because these cats actually originated from phlegmatic England, and not Cuba. However, this breed was given that name because their color reminded people of Cuban cigars.

But this cat’s mahogany fur doesn’t only look like tobacco. It looks more like chocolate and coffee. No matter, it’s a very beautiful animal. It came from a cross made by English breeders in the middle of the last century.

In order to create the Havana Brown cat, breeder used chocolate point and seal point Siamese cats, European shorthair black cats, and Russian Blue cats. Soon the breed was recognized in the United Kingdom and crossed the Atlantic to the United States.

Today, breed standards differ between England and the United States. However, England is more inclined to give the cat a more oriental appearance. The United States prefers traits similar to the Russian Blue Cat.

Introducing the Havana Brown cat, a breed that stands out because of their color–reminiscent of chocolate, tobacco, or coffee. They are also known for their curiosity, intelligence, and playfulness.

Apart from its typical chocolate color, the breed can also have a lilac color. Other traits of the Havana Brown are:

A Cuddly, Active, and Intelligent Cat

Curious, cheerful, and playful, the Havana Brown cat love getting a lot of attention and being pampered. If you don’t give them any attention, they’ll be sure to let you know how they feel.

These cats are good at adapting to living environments. Also, despite being a very active cat, they can live peacefully inside a house.

Extroverted and self-confident, this feline likes to stick with one human family member. Will you be the lucky one?

How to Take Care of a Havana Brown Cat

The Havana Brown cat is usually a healthy, strong animal, with a life expectancy of between 10 and 15 years. However, it can suffer from:

That’s why going on regular vet visits, up-to-date vaccines, and proper deworming are needed to keep any pet healthy.

On the other hand, brushing their short fur weekly will keep it shiny and in good condition. Also, you must have the cat exercise on a daily basis in order for it to remain in shape. Let them do what they love best: playing.