The Myth About Cats' Curiosity

These animals are extremely curious from the time they are born due to their survival instincts. Since they were domesticated not too long ago, they also still possess their hunting instinct. 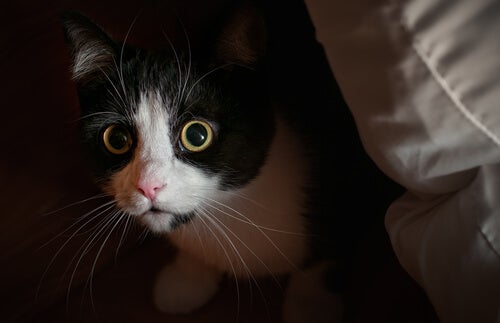 Anyone who has a pet would agree with the popular saying “curiosity killed the cat.” Cats’ curiosity is a distinctive trait about this species.

By just knowing why cats behave in a certain manner, you can better understand your cat and provide him with a more comfortable life that is free from possible domestic dangers.

The curiosity of cats isn’t a myth. Below you can find out why they’re so into snooping around and how this trait cat actually put their lives at risk.

The curiosity of cats: myth or reality?

At birth, kittens are blind and deaf, but they begin to crawl around, sniffing with every step. At three weeks old, kittens are so curious about the world around them that they become an actual whirlwind. They won’t stop for a second investigating every corner around them.

A cat’s curiosity comes from its strong survival instinct, which he inherited from his wild ancestors. Domestic cats show their curiosity in different ways, and with certain objects.

This strange and funny behavior is caused by his impulse to hunt and a cat’s ability to escape from predators. This is something the cat species has acquired through evolution.

Despite being a domesticated species, cats haven’t lost their hunting reflexes. This is because, unlike dogs, cats were relatively domesticated not too long ago.

This hunting instinct explains why kittens spend the day looking into every corner, watching carefully, observing each movement and catching small prey, bringing them home as trophies.

How can a simple box be so amusing for a cat? The explanation lies in the natural defense mechanism that their wild ancestors had when they were in danger.

Finding a safe place that’s out of sight of predators is the reason why cats are so attracted to boxes. There is also the element of surprise; when they’re hiding, they can catch their prey without their victim seeing them.

Heights are another thing that cats love. From high places, they have a broader view of their environment. They can easily observe everything without being disturbed.

Sometimes your cat can even scare you when they unexpectedly jump into your lap. In the wild, small cats are kept safe when they are higher up, watching and jumping on unsuspecting victims.

Our behavior is another factor that triggers a cat’s curiosity. Anyone who has cast at home knows what it feels like to be constantly watched by them; any human behavior is interesting and worthy of being watched and analyzed by felines.

There are many cats that start to imitate human behaviors that are useful to them. For example, opening doors and windows in order to go outside, or opening the fridge to look for food.

The problems with cats’ curiosity

In order for a cat to grow up healthy, it must be free to explore its curiosity. Failure to do so may cause some serious behavioral problems that will affect his health.

Keeping the animal locked up and isolated, without any contact to the outside world or people, results in a lot of distrust. Cats need their space and independence.

If they are confined, they may develop harmful behaviors by obsessively cleaning themselves — which cause skin lesions and bulimia — or they may eat too much and become obese.

Other behavioral problems related to not being able to explore their curiosity are aggressiveness and excessive marking of territory. In such cases, the cat will leave its odor throughout the house.

On the other hand, a cat’s curiosity and anxiety can be dangerous inside and outside of the home. For that reason, it’s necessary to provide them with the right toys to satisfy their curiosity and no to expose them to anything that could hurt them.

Cats are wonderful companions. However, you only have to know how to understand their strange behaviors and give them the necessary freedom to let them healthily and safely develop their feline instinct.