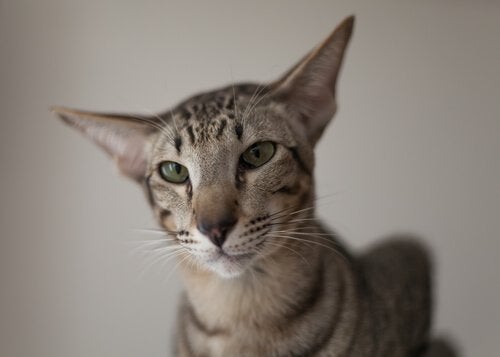 There are hundreds of cat breeds and each one is unique. Some people love them, and others don’t like them at all. No matter what, everyone has the right to their own opinion.  As they say, “there is something for everyone.” In this article, you can find out about the Oriental Shorthair Cat; a breed that you would either like or dislike, nothing in between.

Everything you need to know about Oriental Shorthairs

Continue reading to learn more about this peculiar breed that many people are passionate about. Without a doubt, it is a unique breed and different from many others that you might know.

Their history and origin

This cat originated from Thailand, where it is known to be foreign, although the reason for this is not very clear. Many people thought they were Siamese cats, until they realized that they are very different.

At first, these cats were not not very common, nowadays 50% of the cats in Bangkok are related to this breed. However, in 1920, the first specimens arrived in Britain and the public preferred Siamese cats. It was not until 1950 when some breeders began to look into the possibility of having the Oriental Shorthair as a breed.

By 1968, American breeders also began to be interested in the Oriental Shorthair. Finally, in the 1970’s, these cats became a recognized breed.

They are medium-sized, and their bodies are slender and elegant. This breed is tough and strong, however, their shoulders are never wider than their hips. Their heads are very well-proportioned to their bodies and their skulls have a convex shape. They also have narrow snouts and long and thin neck.

Their ears are, without a doubt, their main trait because they are big and pointy. The tips of their ears should never be tilted, neither forward or backwards. In fact, they look very similar to the famous Sphynx cat.

Their legs are long and thin with small oval-shaped feet. They have long thin tails, and their coat is short, soft, shiny and fine.

Their coloring should be with or without spots, or with or without shades of black, blue, brown, red, cream and cinnamon. Most of them are like this, but there are at least 12 more color variations between bicolor, brindle and dark.

Their personality is similar to the Siamese cat, an animal that is known to be active and temperamental. If you consider cats to be instinctively independent, then this breed is even more so. This cast is more curious than normal, so they will need constant mental stimulation to avoid getting bored.

Maybe this is one of the reasons why they tend to be very playful, and why they are very sociable. They like to communicate with other cats and humans by meowing, which allows them to have good relationships with others. Of course, only when they want to.

They are very stable and always keeps their composure, even when facing problems. Although since these care are sly and affectionate, as mentioned above, they will only act this way when they want to. No matter what, they maybe only acting this way and end up seeking your company and attention.

They have a more powerful voice than other well-known cats, which is evident from when they are kittens. They are an outdoor animal that adapt well to an indoor setting, however, it’s a good idea to take them out for walks.

This unique cat is certainly another example of what nature has to offer us. If you are looking for a loving, independent, calm and soft companion, an Oriental Shorthair will be the perfect pet for you.