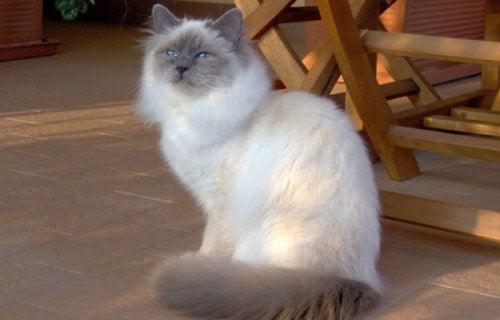 You may not have heard of Birman cats, also known as the “Sacred Cat of Burma.” However, you’ve probably seen this white furred and blue eyed cat before. Continue reading if you would like to learn more about this beautiful creature.

Learn about the “Sacred Cat of Burma”

There’s a legend about this Sacred Cat of Burma‘s origin. According to legend, many centuries ago the Khmer people built a temple to adore a golden goddess with sapphire eyes named Tsun-Kyan-Kse.

The priest who was in charge of taking care of the temple was named Mun-Ha and he spent a lot of time kneeling in front of a statue. While doing so, Sinh, the temple’s cat would join him. Unfortunately, one night, some robbers broke in and killed Mun-Ha, and Sinh stood on top of his body while not looking away from the golden goddess’s figure.

Suddenly, his fur turned golden, his eyes turned as blue as sapphire, and his paws became the color of the earth. According to the legend, all of the cats of the temple went through the same transformation. When Sinh died 7 days later, he took the priest’s soul to paradise with him.

How did the Birman arrive to Europe?

Supposedly, a priest gave a couple of these cats to some English travelers as a token of appreciation for saving his life. Unfortunately, the male died on the journey back, but the female was pregnant.

The first examples of the Sacred Cat of Burma in Europe were found in France. The breed was recognized in 1925. After World War II, the breed almost disappeared and only one couple was left over.  Even though it wasn’t an easy task, the Birman breed was kept alive.

Personality of the Sacred Cat of Burma

Despite cats being famously solitary, the Sacred Cat of Burma is very sociable and easy to domesticate. You can count on this cat being sweet and calm. Their owners frequently describe them as caring, loyal companions.

These cats are always want to cuddle, and if the first person it goes to ignores him, he’ll search for another person. They’re relatively active, but it’s good to encourage some extra exercise during playtime.

Another trait of this cat is how they maintain eye contact with their owners, which is a rare trait in the animal world. In fact, the Birman is more comparable to dogs than cats.

Take care of this breeds fur by combing it on a daily basis; no other grooming is necessary. In some cases Birman cats suffer from a gene mutation that affects their optic nerves. They are also known to suffer from cataracts.

Are you thinking about adopting a Birman cat now? Well, go ahead! You won’t regret it.