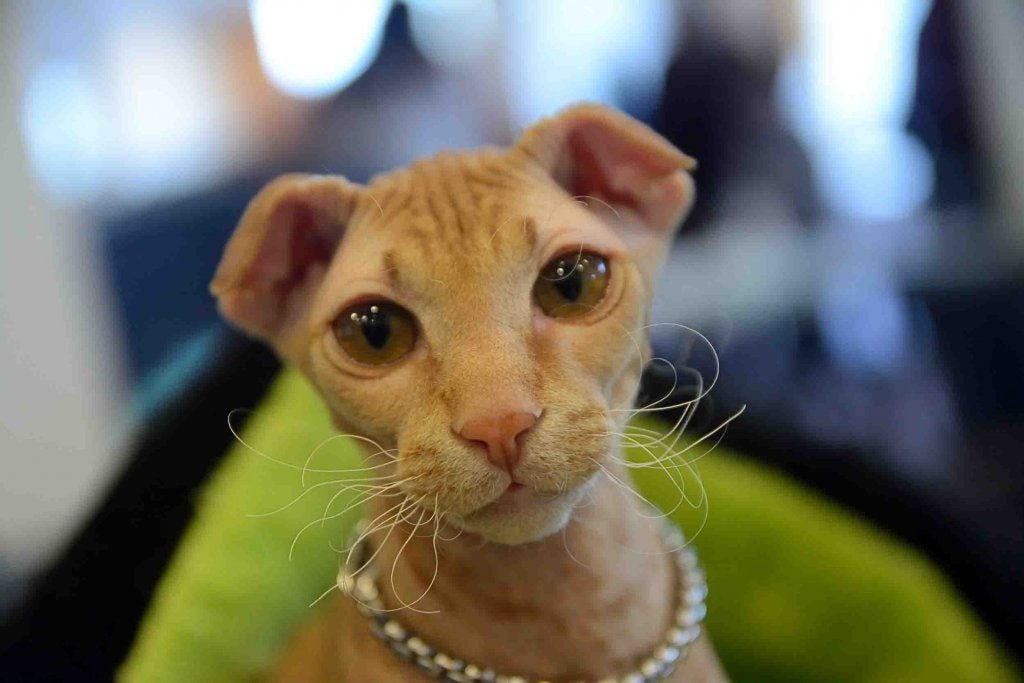 Even though there are a lot of cats worldwide, some being strays or others living at shelters, some people are still creating new breeds. Hairless cats are in fashion and Ukranian Levkoy in a new breed that appeared in the beginning of this Century.

They have a very strange and imposing appearance, but they are affectionate, docile and intelligent. They’re also ideal house cats and can adapt well to small spaces.

Hairless cats, which actually have a very thin coat which is almost impossible to detect, have recently become very popular. Many of these new breeds come from Russia or regions of the former Soviet Union.

In the case of the Ukrainian Levkoy, the breeder Elena Birjukova crossed the Donskoy (below) with a Scottish Fold. Therefore, in 2004 the first Ukrainian Levkoy was born, a hairless cat with his ears folded forwards due to its Scottish genes.

Despite its growing popularity, organizations like the World Cat Federation (WCF) and The International Cat Association (TICA) still don’t recognize this breed. However, it has been admitted to clubs for Russian and Ukrainian breeds.

The Ukrainian Levkoy looks like an alien and its ears are folded forwards that’s is another cat breed on the list of fashionable hairless cats.

Physical Traits of the Ukrainian Levkoy

Everyone has their own preference but that doesn’t mean not all animals shouldn’t be loved and appreciated. Although it does look like an alien, if you look closely, most likely you’ll see its elegant and muscular beauty, even though it has a lot of wrinkles in its thick skin, especially on the belly, head, and neck.

Other than its lack of hair and large ears folded forwards, its other physical traits are:

A Cat that Adapts Well

If your home is very small, the Ukrainian Levkoy could be the perfect pet. Since they’re not restless, they can adapt to small spaces even with very little space to play.

This breed is sweet, sociable, and outgoing. It tends to worship their owner and will probably follow him/her around the house, which is another reason why people say they are like dogs.

They’re mentally stable animals, but the Ukrainian Levkoy doesn’t enjoy being alone. So if there aren’t people at home during the day, it’s probably a good idea that they have other pets to be with.

Special Care for the Ukrainian Levkoy

With a life expectancy ranging from 9 to 15 years old, this cat needs some special care due to its lack of fur. To maintain a good body temperature, it needs a high protein and calorie diet. At the same, putting on a jacket on this breed, like the photo below, wouldn’t be a bad idea.

Furthermore, you need to protect them from the cold and avoid the sun, which can irritate and burn their skin. Speak to your vet about the best way to care for them, since they can obviously have dermatological problems.

This breed also needs to be bathed at least once a month. This is because their skin releases a protective oily substance that absorbs dirt.

Additionally, if you’re looking for a hypoallergenic pet, despite its almost not having hair, this animal is not what you’re looking for. Allergies are actually caused by dead cells from the cat’s epidermis, as well as a substance in their saliva.