Home » Breeds » Cats » What are Cats Afraid of?

What are Cats Afraid of?

You may have noticed from time to time that your cat seems to be afraid of something. We'll show you the most common things that cats are afraid of so you can try to avoid them. 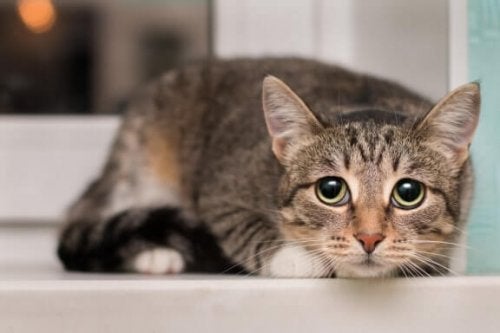 Cats are very independent animals and seem to be very confident in themselves. However, the truth is that they’re actually afraid of many things. We want to take this time to tell you about some of the things cats are afraid of and how you can avoid those things. Unfortunately, some people who are aware of these use them to joke around with these animals. However, this is extremely cruel and we urge you not to do it. So, what are cats afraid of?

What are cats afraid of?

Many of the things on this list may surprise you, but there’s plenty of evidence to show that cats are scared of them. Who would think that an animal that can climb and jump from trees would be afraid of such simple things?

Maybe you’ve seen some videos of cats being scared by cucumbers. No one really knows why they seem to be afraid of them. These videos may seem funny, but they’re really just an example of the cruel jokes we were talking about before.

Some cat owners will use these vegetables to scare their cats just so they can laugh at them. Does that sound fair? We don’t think so either, so don’t be one of those owners! Also, spread the word about how cruel this is, so that other people will get to know that it’s just not fair on the cat.

Balloons seem to be the things that cats are most afraid of. Maybe it’s the way they move that scares them, or the fact it invades their space. Whatever the case, if it comes near the cat, you’ll see panic on his face. This is especially true if the cat tries to scratch at it and it explodes.

Everyone’s heard about how cats are afraid of water, and it’s been proven. Although there may be exceptions to this (since some kittens love taking a relaxing bath) it’s a general rule that cats are terrified of water.

This doesn’t just apply to domestic cats either. It also goes for wild cats, including the king of the jungle! Who’d have guessed it? Maybe it’s the change in temperature that scares them or the fact they don’t like the feeling of the water when it comes into contact with their skin. Whatever it is, what we do know is that cats try to avoid water as much as possible.

You’ve definitely seen your dog run away every time you turn the vacuum on. Well, the same thing happens with cats. They don’t like the vacuum’s noise and they’ll be very afraid of it as soon as they hear you turn it on. That’s why they run away, just in case.

These machines don’t suck anything into them, but the cat doesn’t know that. Because of that, they don’t want to take any chances! Also, cats get really bothered by the air that comes out of them, so don’t use it to tease your cat even if it seems tempting to do so.

Generally, cats don’t like strangers. Of course, there are always exceptions. However, no matter how affectionate and sociable your cat is, it’s likely that he won’t run to greet someone he doesn’t know. Don’t take it personally if you visit a friend with a cat and the pet doesn’t pay any attention to you.

Yes, you heard that right. Socks can also terrify your cat! This is an inexplicable phenomena, but it’s true.

Cats’ ears are very thin, just like those of dogs. So, if they hear sounds like ambulances, fireworks or other similar noises, they’ll get very scared. Try to keep your cat from being exposed to those sounds.

It’s our responsibility to care for and protect our pet. So, try to avoid anything that could scare him, in order to help keep your cat happy and well-balanced.