Why does my cat run around the house like a maniac?

There are theories about this instinctive feline behavior. However, if cats repeatedly run around house like mainiacs it may be caused by some sort of problem. 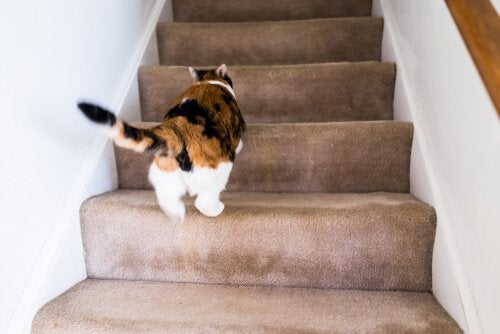 It’s very common to see a cat run around their house like a maniac. Many do it during the night when it bothers their owners the most! Why does your cat behave in such a manner? Can it be fixed? Do they have a disorder? Read on to find the answers to these questions and possibly other you may have.

My cat is running around the house like a maniac, why?

When it comes to this feline behavior, there’s a lot of theories:

To run from predators

Some people associate this behavior with when cats use their litter box. There is a belief that when cats relieve themselves, they bury their feces as deep as possible, and then immediately run away. They do this so predators won’t be able to track their scent.

This makes a lot of sense. If you watch your cat, it’s very likely that they tend to run around like maniacs that after they have defecated. Even though they’re domesticated, those instincts still remain and this may be one of them.

Another group of experts states that it may be related to digestive problems or allergies. A cat may be uncomfortable and will try running around the house in order to relieve themselves from this digestive problem.

Although this was a common and widespread belief, many people don’t agree with it because so many cats have this behavior. It’s hard to believe that every single cat has digestive problems.

Another hypothesis from experts is that cats run around in order to purify themselves.  A cat’s hygiene is really important which is why they groom themselves.

Apparently, after defecating, they want to immediately get away from their stools. This is because cats love cleanliness. However, Anish Sheth, a doctor specializing in feline behavior, says there’s a nerve that connects the brain and the colon. And, when it’s stimulated, it may cause the cat to react strangely.

Have you seen your cat run like a maniac during the night?

Some of these theories may sound credible. However, they seem meaningless if our cat runs like a maniac through the house during the night. It’s possible that one night they’ll have to defecate, but it’s not very common. Especially when it’s happening every night.

So, it’s obvious that there might be other causes or at least other theories.

There’s a lot of people who say that cats have large doses of energy. Since they don’t go out for walks or play a lot of games, running is their way of using up that excess energy. However, this behavior seems to be more common in kittens.

If your cat has fleas, a parasite or have an itch on their body that they can’t reach, it’s likely that they’ll round all over the house in order to get rid of it. If your cat doesn’t normally do this, and suddenly takes off, then you should check if they have any fleas or other skin conditions.

This condition is also known as undulating skin or nervous cat syndrome. This may be another reason why your cat runs all over the house, but this doesn’t happen all the time. If were happening, then your cat will be biting and scratching their tail or other body parts.

This syndrome may become a compulsive behavior and many think it’s associated with allergies, toxins or neurological disorders.

Although it may be funny to watch your cat run around the house like a maniac, it may be caused by a serious problem. Keeping an eye on your pet is your responsibility. So, if you notice that he’s doing this too often, don’t hesitate to go them to the vet.