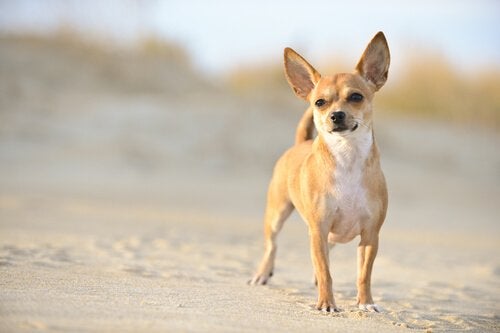 Chihuahua dogs, known in their country of origin [Mexico] as Chihuahueño(a), has the same name as the largest state of that country. The reason is that chihuahuas were first discovered in that region. The name refers to an object (yes, animals are still considered objects by many) from that particular region and it’s different from how a person would be referred to, which is Chihuahuense.

The origin of the word Chihuahua is much discussed among historians and linguists. There are five known meanings, but the best-known origins are from Nahuatl Xicahua, which means “dry and sandy place.”

There’s no universal agreement on this hypothesis, however. In any case, everyone agrees that the Chihuahua dog is the smallest canine in the world.

Nobody really knows when the first Chihuahuas appeared. Some say that because people ate dogs in the ancient cultures of Mexico it was the smallest breed with the least meat who survived in that region.

However, the most widespread hypothesis indicates that these dogs are descendants of the Techichi, a mute companion dog kept by the people of the Toltec culture. Furthermore, the current Chihuahua dogs are a lot smaller than their predecessors.

In terms of their appearance, we can highlight their straight pointy ears and big bulging eyes. Their height ranges between 6 and 10 inches and their weight from 3 to 7 pounds. Their coats come in many different colors such as black, brown, chocolate, gray, and tricolor patterns with lines or mottled. Another record held by the Chihuahua breed is their longevity: they can live up to 17 years.

Character and temperament of Chihuahua dogs

This is one of the breeds most chosen by Hollywood celebrities (who carry them everywhere either in their lap or in designer bags). This dog is very attached to their owners, and profess them complete loyalty, affection, and respect.

Chihuahua dogs are very restless and aren’t at all weak or fearful despite their size. If anything, it’s actually the opposite. They don’t seem to be aware of their size and seldom hesitate to confront larger animals. These dogs’ personalities are noteworthy, along with their keen intelligence and constant alertness.

Socialization and training are very important to the breed’s puppies in order to prevent sickness or depression in them. Chihuahuas need to live in a pack, either with other dogs or surrounded by people.

Also, these pets don’t like to have many small children around because as they’re tiny size and children can get quite rough and damage them through their somewhat intense games. There are many Chihuahuas that greatly fear children because of their hyperactivity and/or height.

These tiny dogs are ideal for small homes because they don’t need too much space to live comfortably and happily. A good bed (or a sofa) and a warm coat will make them the happiest animals in the world.

How to care for Chihuahua dogs

While it may seem they’re a fashion whim of the humans who often wear them as accessories, no different from a coat or a jacket, the truth is this breed is highly sensitive to cold because of their small size and complexion. This is, perhaps, the reason why they stay very close to their humans.

Other things to take into account in relation to their health is they can present genetic and neurological abnormalities such as strokes or epilepsy. Like many other miniature dogs, they often have hydrocephaly.

Further, their large and protruding eyes often get infected if they’re not cleaned often and accordingly. Also, the person in charge of a Chihuahua should comply with their needs for balanced nutrition. That is, healthy and in accordance with the size of the canine. The individual specimens who are overweight may have, for example, elbow dislocation, chronic bronchitis, tracheal collapse or ligament problems.

As with every other dog, Chihuahuas need to go out for walks so that they can do moderate exercise every day. Intense training isn’t necessary, and a few turns around the block every morning or afternoon are enough. For this reason, this dog breed can be a good option for older, sickly or low energy people.

Finally, it’s important to note that you shouldn’t treat Chihuahua dogs as if they were babies. They’re definitely lap-dogs due to their size. Still, they deserve dignified treatment and in accordance with their age. Otherwise, they’ll be confused and depressed because they just don’t understand they’re dogs and not humans.

Small Dogs: 6 Things You Should Know
Small dogs tend to be quite sensitive to sudden temperature changes because they don't have much fat under their skin. Read more »