According to lengend, dogs that have blue tongues are a a curse that was brought down by the gods. Science says it's just a genetic mutation due to having too much or very little melanin. 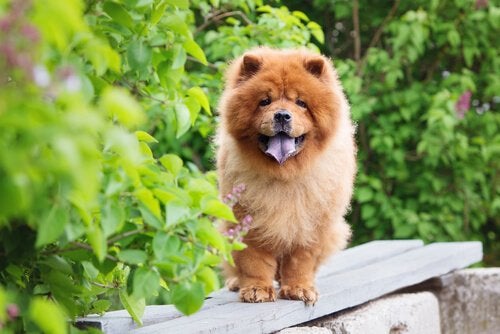 There are plenty of (contradictory) theories about the origins of dog breeds with blue tongues. They range from pagan legends to scientific hypotheses, but in the end, the explanation is more complicated than it might seem.

The tiny blood vessels in tongues form a single layer. Most dogs and other animals have a pinkish tongue due to all the oxygen the blood carries throughout the tongue.  Experts say that some dog breeds have blue tongues due to a natural genetic mutation. That would explain why it’s not so common in most breeds.

However, scientists still haven’t demonstrated that this is an adaptive feature. Perhaps, it could simply be an accidental change to their genetic tree.

An early theory said that some breeds of dogs and other animals produce higher levels of melanin than normal. This famous substance is what controls skin and hair pigmentation in mammals. Having a lot of it would cause intense tongue color.

However, another theory says that some breeds have blue tongues because of a tyrosine deficiency, which caused them not to produce enough melanin to give their body the right colors.

The explanation from Chinese mythology

According to Chinese mythology, there’s a legend that explains the origin of Chow-chows. The legend goes that the Chow-chow was a dragon dog that loved the day but hated the night. One night, tired of the darkness, he decided to lick the sky to wear it away in order for it to always be daytime.

This act enraged the gods, who decided to punish it with an eternally black or blue tongue. That way the Chow-chow would be constantly ashamed whenever he looks at his own reflection. On top of that, everyone would know which dog had tried to defy the gods.

Which dog breeds have blue tongues?

The Shar-pei and the Chow-chow are two of the most well-known blue-tongued breeds because it’s a dominant gene for both of them. It’s so dominant that some Chow-chows have purple, even blackish tongues.

“Chow-chow” literally means “puffy lion dog.” They might look like stuffed animals, but Chow-chows are actually direct descendants of the Tibetan wolf. Still, it’s hard to deny how cute they are with all of that puffy fur, big head, and blue tongue.

They were historically used in China to guard homes, farmlands, and sacred temples. Men would also take them on most of their hunting trips. Nowadays, you can find them all over the world because they make great pets.

Their body is perfectly adapted to the cold and several climates in China. They’re compact, tough, and have a thick layer of fat surrounding their body. They especially famous for their heaping red fur.

The Shar-pei and its famous fat rolls

The Shar-pei and Chow-chow are so similar that some people think they’re close relatives. On top of having blue tongues, their bodies are also really similar, except for their fur. Other similarities include their facial features and expressions, and how good they are as hunting and guard dogs.

Shar-peis have short fur and a ton of fat rolls. The rolls are much more noticeable on puppies because of all the extra skin they still have to grow into.

Shar-peis have been with humans since the 3rd century B.C. There is evidence of this due to the discovery of some ceramic objects depicting the Shar-pei’s ancestors. It seems like they were extremely important figures in ancient Chinese culture.

Even that far back, people used Shar-peis for herding, guarding, and hunting. Chinese farmers saw these blue-tongued dogs breeds as their best allies when fighting predators off of their land.