Fur and endurance are two of the most important traits for a dog to withstand hard weather conditions. However, almost any pet has a good time in the snow! 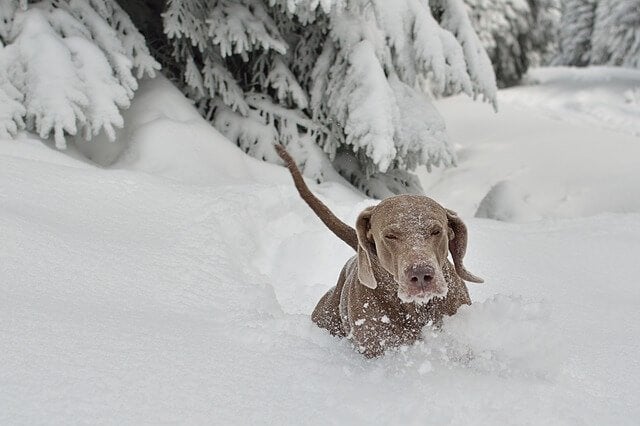 If you take your dog into the snow, you’ll soon find out that he loves it. Regardless of breed, any dog can enjoy this cold white mantle that covers the mountains in winter. However, some dog breeds are specially designed to be in the snow, and even to work in it. Would you like to know what breeds they are, and what makes them different from other dogs?

The most well-known snow dog breeds

If all dogs love snow, these breeds worship it. The following breeds are the mostly known as snow dogs:

This list couldn’t begin without them.  If any dog is associated with sleds, snow, and the cold, it’s certainly the Husky.

That’s normal from this breed to be in very cold climates because these dogs come from Northern Asia. For many years this dog has been used to pull sleds.

This is the Husky’s “cousin“, and it originates from the Arctic, which is the coldest place on Earth. For decades, this breed too has trained as a search and rescue dog and sled dog in cold and remote places.

Without a doubt, after the Husky, the Alaskan Malamute deserves to take second place on this list of snow dogs.

As its name suggests, this breed comes from Scandinavia, it has been and still is used as a hunting dog in cold climates.

In fact, the region in which it lives is one of the coldest in the world. Plus, this dog is great a withstanding the snow and therefore deserves to be on this list.

The “Smiling Samoyed” as people call this dog with thick white fur that resembles a stuffed animal, is also one of the most famous snow dogs in the world.

It comes from northern Russia…need we say more?

Note, first of all, fishermen used this dog to pull their nets in very cold temperatures and frosty conditions.

Because of this, the Terranova has shown that it can withstand the snow.

This dog is considered one of the oldest breeds in the world. In fact, for years the Eskimos kept it as a pet, as archaeological finds have demonstrated.

Even today, the majority of these dogs live in Greenland — which is where this dog originated from — and don’t react well to high temperatures.

You might not ever think about this breed when it comes to snow dogs. Yes, although the Chow Chow comes from China, it comes from one of that country’s coldest regions.

Therefore, it’s an ideal snow dog. It’s obvious that all that hair has to be useful for something, don’t you think?

This brave dog could not be left off the list of the most famous snow dog breeds. This breed is known for being a great a search and rescue dog in extreme cold conditions.

The Akita and Shiba Inu are dogs that come from Japan. For many years people used them to hunt bears in the snow.

Their physical strength and thick fur makes them very resistant to snow.

This might be one of the strangest snow dogs because of its shortage of hair. It’s a short-haired dog with blotchy skin which is known to be a cross between a pointer and an Alaskan Husky. It seems like the genes of the latter are the most dominant, because despite how it looks, its resistance to snow is obvious. This breed is perfect for cold places.

What do you think about this list of snow dog breeds? Most likely there were several breeds on this list were a surprise to you.