10 Tips for Dealing with Excessively Sexual Behavior in Dogs

Dealing with excessively sexual behavior in dogs can be a problem. Don't assume that neutering or spaying your dog will put an end to all sexual desire.

We all know the effect that a female dog in heat produces in male dogs! In this article, we’ll ask whether there’s any way to control sexual behavior in dogs.

This is one of the most common solutions. The dog’s testicles, where testosterone is produced, are removed.

Despite this, male dogs will still be attracted to females and the smell of female dogs in heat. Neutered males will have much less sexual vigor, though, and won’t be able to get female dogs pregnant.

You should neuter your dog ideally before his first birthday, to ensure your dog hasn’t had contact with female dogs and to be able to control him more easily.

Dogs must be on a leash in parks and only in very specific situations can you have them off leash. With the leash, you’ll avoid your dog running after female dogs. If your dog is off the leash and the attraction is very strong, then he won’t obey your orders.

The dog must be trained to behave well. Good training with certain commands is very important. For example: up, stop, sit down, go, come. Although these commands don’t guarantee 100% control of the dog when there is a female in heat nearby, they certainly should help.

4. Each dog has unique preferences

Female pheromones drive male dogs wild. Based on those pheromones, male dogs, like other mammals, choose which female they want to mate with.

Be prepared when your dog is reaching adolescence whether they’re a male or a female, because either way can be problematic. Most unwanted pregnancies in dogs occur during adolescence so carefully watch your dog’s behavior during this period.

7. Training them not to hump

Most male dogs try to “hump” their owner’s arm or another part of the body. At that moment, you have to correct your dog. You could shout “no” to make him understand his behavior is unacceptable.

If your dog is young and needs lots of stimulation, you have to make sure he gets a lot of exercise. In general, this daily routine will moderate sexual behavior in dogs.

9. Spray them with water

When puppies are growing up, they often try to hump certain objects such as cushions, pillows, teddy bears, etc. When this happens, you must say to your dog “out”, and immediately spray him with water using a water gun or a spray bottle. This will make him stop. Then, after a while, you can play with him or take him out for a walk.

Don’t try medication to alter sexual behavior in dogs, because it’s not beneficial for their health. If the problem is getting worse, you should visit the vet. 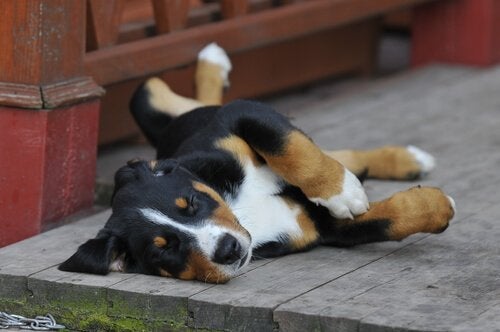