These dogs belong to a group of more than 50 breeds. They're particularly known for their strong and muscular appearance and are used as guard dogs. 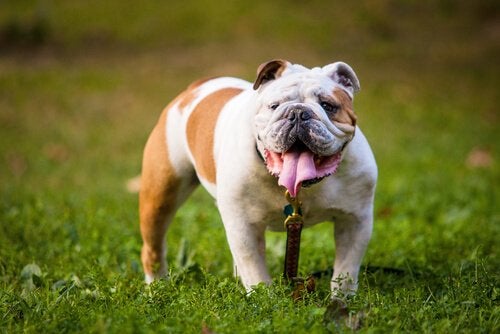 Molosser dogs have a firm, muscular body and they are known for their incredible jaw strength and short snouts. They’re used as guard dogs and they come in all sizes. Continue reading if you want to find out more about these amazing dogs.

How many breeds of Molosser dogs are there?

According to the International Cynology Federation (FCI), Molosser dogs are found in group 2 and divide into two additional sections: mastiff or mountain types. However, both of them together make up around 50 breeds. Below, are some of the most well-known Molossers:

This breed is originally from the United Kingdom (it’s one of their national symbols) and it was first appeared in 1500.

They get their name from being used to control bulls. Later on, people used them for bullfights. Fortunately, this practice was banned in 1835.

As for its physical appearance, the bulldog (in the picture above) has a sturdy body, large head, wrinkly face, short snout, curly tail (which is sometimes docked), and smooth fur. They can come in beige, white, striped, and reddish colors. Males weigh usually around 22 kilos.

This one of the most well-known Molosser because they are enormous. They are the descendants from the dogs that Romans watched fight in circuses. The Latin word “mastiff” means “solid,”, which is one of this breeds main qualities.

The Neapolitan Mastiff is not aggressive, despite its dangerous appearance and powerful size (75 cm tall and up to 90 kilos in weight).

They protective over their family and territory, which makes them great guard dogs for homes that have a good amount of property. However, they can eat a kilogram of food a day!

Even though this breed became famous in the United Kindom, they are originally from China. Also, they are one of the most popular dogs in the world and their small size means they can adapt to life pretty much anywhere.

Just like most Molosser dogs, the Pug suffers from Brachycephalic Airway Obstructive Syndrome because they have a short snout.

It’s also very important to clean their wrinkles on their faces to prevent them from having any fungal issues. If given too much food, pugs can easily become obese.

This is one of the largest Molosser dogs, that belongs to the mastiff family and they were created in France to be a guard dog. It’s one of the oldest breeds in France. They have a firm and determined personality (although affectionate and patient), and they have very strong and powerful.

The French Mastiff has a large head, flattened snout, well-marked wrinkles, and strong teeth. Also, their fur is short and fine and they come in mahogany or light brown.

This final Molosser dog on this list is the lovely little dog you see in the picture below. Even though this breed is originally from France, they became more well-known in England after the Industrial Revolution.

Despite their small stature (30 cm), the French Bulldog complies with the criteria for a Molosser: strong, compact, muscular body, wide head, and flappy lips. They also have cute pointy large ears.

In regard to their personality, they’re sociable, playful, friendly, patient and protective with their children (particularly with females). Although they’re small, they make great guard dogs because they are always alert to strange noises.

Of course, these aren’t the only Molosser dogs. These are just the most famous one. Some other examples of this group of dogs include the Great Dane, Bull Mastiff, Boxer, Rottweiler, Boston Terrier, and the English Bull Terrier.