All About The Pinscher 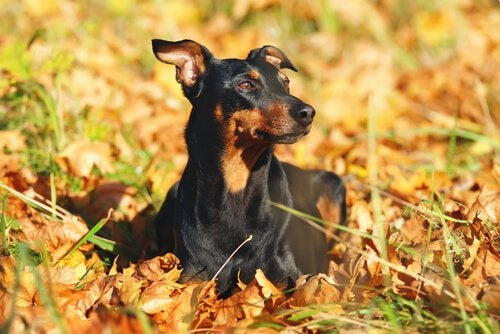 The Pinscher was bred to guard and take care of farms. However, today their main “purpose” is to just be a pet. In this article you’ll learn all about this German breed that stands out for its great elegance and poise.

Origins of the Pinscher

The word Pinscher is from German and it means “biter”. Later the name came from the English “pinch”, which refers to the dog’s cropped ears that were made to prevent other animals from biting them. The German Pinscher or Medium Pinscher (a common breed today), is a very close relative of the Schnauzer, and its origins date back from the 15th century.
At that time, they were used by Bavarian farmers to control rodent pests around their farms. Therefore, some people believe the Black Terrier is another one of this dog’s ancestors.  Other research indicates that it comes from the Rat Pinscher, a breed that’s already extinct.
After World War II, this breed was about to disappear. However, thanks to a man named Werner Jung, the breed is still present day. After the German Pinscher, other breeds emerged like the Miniature Pinscher and the Doberman. Although many consider them to be attractive and elegant animals, German Pinschers have never been able to surpass the popularity of their two descendants.

Features of the Pinscher

This dog is medium sized and can measure up to 50 cm and weigh 20 kg (adult males). It carries itself proudly and has strong muscles, a slender head, and an elongated snout. It has slightly folded ears that droop on the sides of its head (usually the ears are cropped and the tail is docked when they’re still puppies)

Its fur is short and rough, and can be brown, black or brownish. The dog’s belly and chest have a reddish color.
Currently the German Pinscher is a companion dog. Also, it can help control pests or small rodents in large houses despite it not being a hunting dog. Due to its size, it can live in a city apartment without any problems. However, it will need exercise almost every day.
Although this dog is not as imposing as the Doberman, it can work as a guard dog too. It has no problem defending the property and this dog won’t become territorial with its owner this dog always remains faithful to his owner).

They are very intelligent, confident, and lively dogs. They get along well with the entire family, although once they choose their ” one and only” owner, that’s the individual they’ll respect and sometimes allow him/her to pet and play with them. They may require a lot of attention and be possessive of their “chosen one”.
Pinschers are always alert and on the lookout for strangers. If you take one for a walk in the park, it must wear a collar and muzzle, since it may pick fights with other dogs. Due to its short, smooth coat, it does not require too much attention. You only need to brush it regularly (once a week) to remove dead hair. It’s very important for this dog to do outdoor activities, since it’s so energetic.
Letting him run around in an open area might be enough, as long as he doesn’t get lost. Pinschers are ideal companions for exercise enthusiasts, because they are good company during exercise routines (for example, bicycling or running).
If they don’t get enough exercise, they may destroy any objects lying around. They should sleep inside the house, especially in winter. Although the Pinscher is a very healthy dog, it can suffer from three hereditary diseases: cataracts, Von Willebrand syndrome (bleeding disorder) and hip dysplasia.
Link copied!
Interesting Articles
Dogs
The Causes of Epilepsy in Beagles