American Akita, a Dominant Dog with a Noble Personality 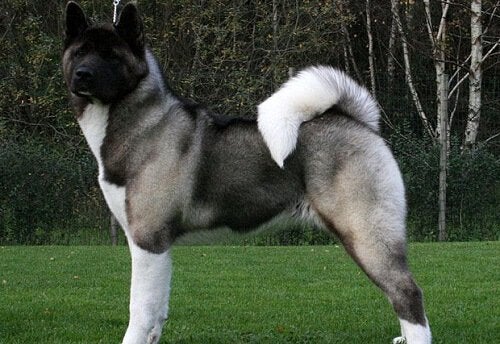 The American Akita is also known as the Great Japanese Dog. Although its name might remind you of Hachiko, a dog that had a movie made in his honor, these dogs are different. Continue reading if you want to know more.

All About the American Akita

Despite their differences, the American Akita has many similarities to the Akita Inu, such as its origin.

Since 1603, these dogs came from the nation of Akita. They were used as fighting dogs and also in bear hunting. Almost three hundred years later, this breed was crossed with other dogs such as the German Shepherd or English Mastiff, which made the American Akita a much larger dog.

In 1910, dog fighting was banned and this breed become so popular that there 9 different types appeared 20 years later.

Not to mention, during the Second World War, their skin was used to make military clothing. The military ordered the slaughtering of all dogs, except for German Shepherds because they were used by police forces. This obviously wasn’t good for the American Akita.

At that time, a cross with the Kongo-go was popular. This type of Akita had traits from both the Mastiff and the German Shepherd, so these dogs were taken to the United States for military purposes.

This dog continued developing in the United States. It was very intelligent and versatile, which made it a much sought-after dog in the country.

On the other hand, the Japanese sought to recover the original Akita by crossing it with another bloodline. This is what marks the difference between the two breeds. Now there are two types of Akita, the American and the Inu.

Physical Characteristics of the American Akita

This breed is large, sturdy and has great physical strength. It’s said that they’re resistant to pain, as well as high or low temperatures due to their thick fur. Their tail is always curled up over their back and is very fluffy. They have a wide triangular head, a wide yet short snout, small eyes, and ears that point up.

They’re bulky and look imposing. Males tend to measure between 61-71 cm and weight between 32 and 35 kg.

Due to their size, they’re considered to be potentially dangerous. However, they’re perfect for playing with children, because they love being in a family setting. They’re always ready to defend their family with their life if necessary.

They’re agile, devoted, and loyal to their owners. They’re friendly with guests but not so much with other dogs, especially ones of the same sex. This is because the American Akita is a dominant territorial dog and looks at other dogs as a threat.

They’re very intelligent and independent dogs that are good at following orders as long they are trained at a young age. However, this is not easy work because its dominant personality can sometimes mean it won’t pay attention and will try to walk over you. That’s why you must make take the leadership role at all times in order to train them successfully.

Despite having been used as a fighting dog in the past, they’re not aggressive at all. If you own one, you’ll be able to feel their affection, friendship, and loyalty at first hand. However, females are less territorial and easier to train.

The American Akita is a strong and healthy dog that doesn’t tend to have any severe health problems. However, their fur requires a lot of attention, frequent brushing, and the use of good cleaning products to keep it nice and shiny. Their strength and size means they need physical exercise to keep them in shape and emotionally balanced.

The American Akita is a large dog that needs space and patients, so take a close look at your overall situation before you decide to get one.